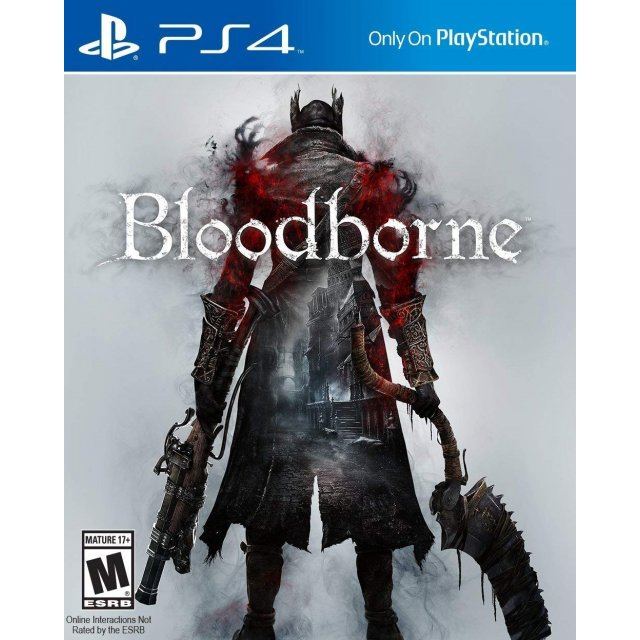 Works on all systems sold worldwide, a correct regional account may be required for online features.
1w Expected stock arrival within 1 week.
US$21.99
Our previous price:US$ 59.99
You save: US$ 38.00( 63% )
Manufacturer
Sony Computer Entertainment
Rated By Our Customers
1w Expected stock arrival within 1 week
Price
US$21.99
Our previous price:
US$ 59.99
You save:
US$ 38.00( 63% )
Play-Asia.com Return & Refund Policy
Trustpilot
Trustpilot
Click on a thumbnail to see more pictures for Bloodborne

If Bloodborne needs to be summed up, then the prevalent themes would be: exploring the fearsome unknown, intense life-and-death battles, and a familiar yet uniquely new online experience.From the makers of the infamous Souls series, From Software's PS4 exclusive will attempt to take the tried and tested formula of giving players a sense of achievement to the next stage - especially when Miyazaki, the original creator of the Souls series is back at the helm. What is promised is a harrowing experience like no other, and fans of tension, discovery, and straight up fun will sure to be excited to play Bloodborne.If you have played the previous Souls games, then this one is a definite must buy. But if you haven't, please allow us to describe why we at Play-Asia.com are especially excited to play this game on February 5th, 2015!The 'Souls' Aesthetic Finally Brought to Light:While Dark Souls 2 was a beautiful game on release, the original was meant to have a much richer sense of lighting, with focus on what players could or could not see.In the case of Bloodborne, the attention to detail is almost overwhelming as gorgeous lighting spills forth from the moon, only to be overtaken by the eventual darkness; players will have to rely on the muted lanterns burning in the streets, or illuminate dangerous sections with a trusty torch. The torch feature on Dark Souls 2 is now in full effect, as it seems to be a requirement for any who wish to survive.Exploring Yharnam, and the World Beyond:One of the most exciting things we've heard about Bloodborne is the intricate world we'll be able to explore.Based on the Gothic architectural style and movement of 12th to 16th century, a foreboding and meandering design will echo Miyazaki's expertise on creating interconnected levels similar to Dark Souls; the feeling of discovering the story and context of lore through a slow archeological pace can only add to the increasing sense of dread of not knowing where to go at first, if at all. This maddening masochistic approach is signature to the Souls series, and while the faint of heart may balk at this style in lieu of instant gratification, the final feeling of mastering a world through trial and error is one that we welcome time and time again. While the trailers have only offered a view into Yharnam, From Software has stated that the game's universe is much much larger, and perhaps the largest in scope as Bloodborne leverages the PS4 technology.Poised and Ready for Battle of the Most Difficult Degree:While the initial impression from the E3 trailer of Bloodborne lent itself to comments on how it seemed like a hack-and-slash, details revealed have shown that combat in Bloodborne is an evolved version of the Souls combat system. Enemies are far more agressive and quicker, and the amount of enemies that a player will face at once has been increased; instead of waiting for an opening or tanking through the game, players are now charged with strategically commanding the flow of battle.Tactics revolve around the "Regain System" that awards players for taking risks and being decisive. By striking back at enemies after taking damage within a short window of opportunity, players can regain lost health, almost as if they were taking revenge on the enemy - the idea is to remove the negative feedback of losing health and replace it with a sense of a fighter's will, to persistently adapt blow by blow until a foe is vanquished. The most important rule now is to master an offensive and counter-attack style, as opposed to waiting and timing defensively.All of this combined with Bloodborne's use of melee attacks and short ranged attacks make many controllers soaked in sweat and tension!

If you are familiar with Bloodborne, why not let others know?