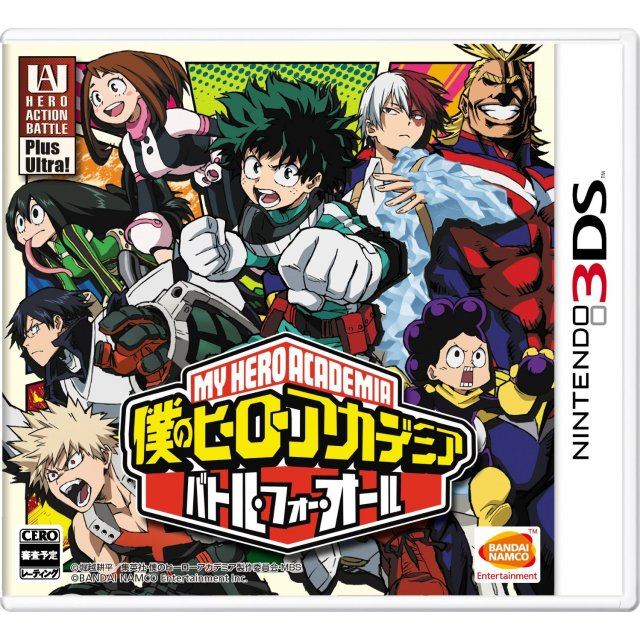 Boku no Hero Academia: Battle for All

Lauded as one of the series to become the "nextNaruto,"KōheiHorikoshi'sBokuNo Hero Academia (lit. My Hero Academia) has promised great potential, just like it's characters loosely based on American Super Comic tropes. In fact, one of the more striking factors of this endearingmanga(and soon to be anime) is how the art style combines bothmangatechniques with American comic art styles; the hero killer arc definitely had a nice homage toMcFarlane'sdepiction of a crazedvillian, almostVenom-esquein demented grin.

For those unfamiliar withBokuNo Hero Academia, the story followsIzukuMidoriya, a boy living in a world where superpowers manifest as "quirks" - as he has none, his enthusiasm to be a hero and selfless deeds eventually catches the eye of the world's most powerful hero All Might;Midoriyainherits this power and begins a new life in a school for young heroes, but with this comes great responsibility, especially with an oncoming onslaught ofvillainsset to destroy everything he stands for.For anyone who's been following this series, it's easy to understand why such popularity exists; in Japan, initial volumes of thetankōbonsold out immediately on release.

With such potential, it's no surprised then thatBandaiNamcohas something in the works - if it's inShonenand it's popular, it's almost expected at this stage. Having just released the first trailer for a project named "BokuNo Hero Academia: Battle For All" for the3DS, we can now see that this title is apt in it's direction - it's a fighting game with several popular characters revealed as playable!Stay tuned for more updates asBandaiNamcoreleases more news for this game!

If you are familiar with Boku no Hero Academia: Battle for All, why not let others know?