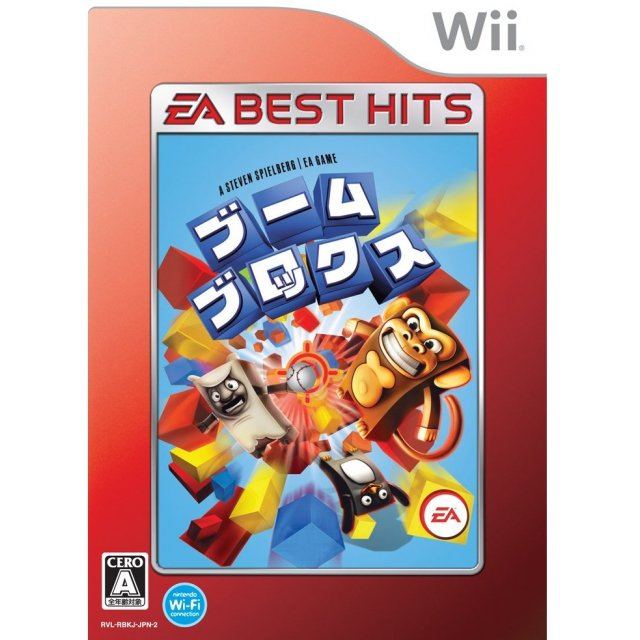 BOOM BLOX™ is the must-have Wii™ game for Summer 2008. This action-puzzle game is the first game developed in collaboration between EA and director and producer, Steven Spielberg. Perfect for kids 8-12 years old and fun for the entire family, BOOM BLOX offers action-packed destruction that takes Wii play to a new level of enjoyment and creativity. BOOM BLOX is also available across major carriers for the mobile phone.

If you are familiar with Boom Blox (EA Best Hits), why not let others know?

make sure you get some rest in between...or you'll find your arms aching!
[This review is based on another version of this product]
damiand (26) on 14, Oct. 2009 16:28 (HKT)
Truly amazing
What a game, what a classic.
[This review is based on another version of this product]
PuNiao (365) on 30, May. 2008 21:41 (HKT)
Boom Blox
If action has a name, it has to be Steven Spielberg. The auteur has dipped his creative fingers into video games and if Boom Blox is any indicator, good things are coming, Part Jenga, part dominoes and part puzzle, Boom Blox reminds me of a carnival game where you toss a baseball to knock over a stack of wooden blocks. Exclusive to Nintendo Wii, the game makes full use of the Wii remote that doubles as a baseball. In each level, players are faced with towers of wooden blocks filled with gems. You must topple the stacks to get the gems. In many of the levels, using one throw to create a domino effect that topples all the towers gets you the gold award. One thing that works well in the game is physics. Hitting a piece of the tower at the right angle causes it to fall fowards, backwards or sideways with great realism. With the Wii remote, the game can detect the force of thr throw, which is important. Nudging a block with the baseball might be all it takes to topple a tower, whereas a forceful throw might case the shower to shatter instead. As the game progresses, so does gameplay. Some blocks might disappear or detonate when hit. But others detonate only when hit by another block of the same type. This is where precision throwing comes into play. There are also levels where instead of plain destruction, you have to remove blocks one by one to prevent the tower from falling. Electronic Arts (EA) did a great job with the controls which now act as your fingers. You can gently pull blocks from the tower or tug at them forcefully. Mastering the easy-to-use controls is a must in approaching this simple but addictive game but be warned - constant playing can cause pain in the elbow. There are also levels where you end up shooting zombies and cowboys. The action gets repetitive after a while, but the puzzle aspect keeps the game fresh. Alas, the duration of the game was rather short and I completed 72 per cent in just two days. The graphics are also rather simplistic and well, blocky. Even the characters are wooden blocks with faces superimposed on them.