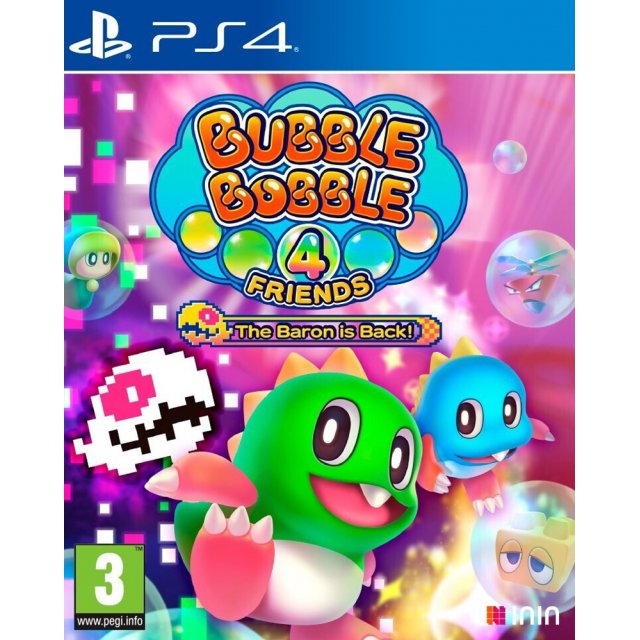 Works on all systems sold worldwide, a correct regional account may be required for online features.
1-2w Expected stock arrival within 1-2 weeks.
US$39.99
ININ Games
1-2w Expected stock arrival within 1-2 weeks
Price
US$39.99
Play-Asia.com Return & Refund Policy
Click on a thumbnail to see more pictures for Bubble Bobble 4 Friends: The Baron is Back!

Bubble Bobble 4 Friends received a lot of praise from the critics and fans, with many requesting more content. Hence The Baron Back comes with 100 new additional stages. So there are twice as many stages as before! It also includes a much-requested online ranking feature that allows players worldwide to compare their high-scores and compete against each other.

The return of the fan-favorite villain, Baron von Blubba, brings the additional thrill and makes the new stages quite challenging, given that he is invincible.

You can play together in multiplayer with up to four players. Also included is the original arcade version of Bubble Bobble.
A celebration for fans and fun for the whole family!

No reviews for Bubble Bobble 4 Friends: The Baron is Back! yet.