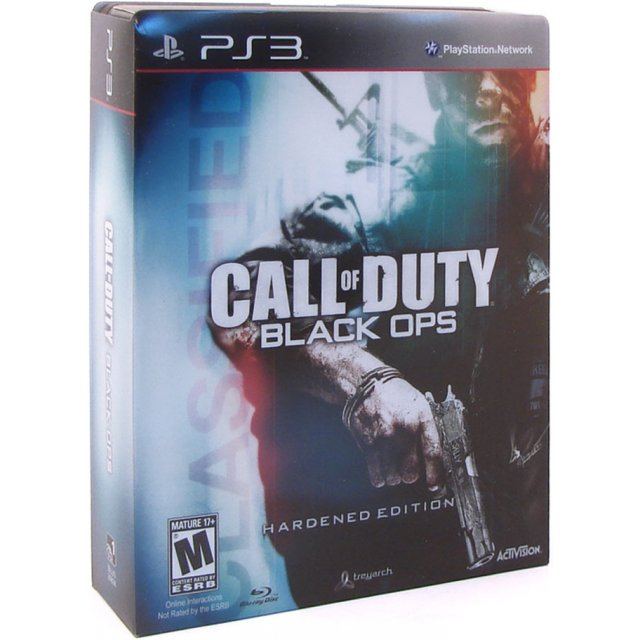 sold Out of print / Out of stock.
Manufacturer
Activision
Compatible With PlayStation 3™ (PS3™)
Version


Click on a thumbnail to see more pictures for Call of Duty: Black Ops (Hardened Edition)

Call of Duty: Black Ops is a first-person shooter with stealth and tactical play aspect that puts players in the role of a shadow soldier fighting in a variety of historically representative fictional Black Ops missions of the Cold War era. Created with the input of actual Black Ops soldiers from the time, the game mixes traditional Call of Duty tactical shooter gameplay with new gameplay options designed to expand the players' experience. Additional features include extensive multiplayer options, along with new vehicles and explosive new weapons.
Putting Out the Hotspots of the Cold War
Follow-up to 2009’s blockbuster Call of Duty: Modern Warfare 2, Call of Duty: Black Ops breaks new ground in the Call of Duty series and the video game industry at large by delving into the not-so cold conflicts of the Cold War.

Inspired by the experiences of real Black Ops soldiers of the era, the missions of Call of Duty: Black Ops take the player to a wide variety of settings, ranging from snowbound mountain strongholds in historical Soviet held territories, to the jungles and urban settings of Vietnam War era SE Asia. Throughout all, care has been taken to maintain the traditional essence of Call of Duty style combat, while also introducing new types of player action that add to the gameplay experience. Additional features include co-op, versus and team-based multiplayer options, new vehicles like the SR-71 Blackbird and lethal new weapons such as explosive-tipped crossbows.

If you are familiar with Call of Duty: Black Ops (Hardened Edition), why not let others know?

daylan_b (2) on 22, Dec. 2010 12:08 (HKT)
Review of zombies
Still the same great game-play that came to us in WAW. Maybe if you bought the regular edition it wouldn't be that great because you didn't get the 4 extra maps. The new levels are pretty fun, making the only things that make you die are being completely overrun. Many traps have also been added to increase the ease of zombie death.
The only reason it doesn't get a 5 star rating and instead gets a 3?
NO FLAMETHROWER IN ZOMBIES! The one gun that in effective hands allowed you to never worry about ammo and only worry about being good.... gone.
The new guns are fairly nice though.