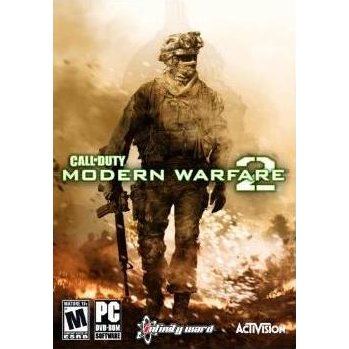 Activision
Rated
By Our Customers
Compatible with Windows™ (PC)

sold Out of print / Out of stock.
Manufacturer
Activision
Rated By Our Customers
Compatible With Windows™ (PC)
Version


Click on a thumbnail to see more pictures for Call of Duty: Modern Warfare 2 (DVD-ROM)

Prepare for the ultimate invasion! The most anticipated game of the year and the sequel to the best-selling first-person action game of all time, Infinity Ward's Modern Warfare 2 will strike worldwide on November 10, 2009. Activision Publishing, Inc. will release the newest installment in the groundbreaking and record-setting follow-up to the 2007 blockbuster, Call of Duty® 4: Modern WarfareTM, that has sold more than 12 million copies worldwide, to date.

If you are familiar with Call of Duty: Modern Warfare 2 (DVD-ROM), why not let others know?

katrasho_03 (12) on 09, May. 2010 17:13 (HKT)
best game ever
this game is one of the best game ever created
cant stop playing it
its addictive
cedricgreutmann (2) on 22, Mar. 2010 18:28 (HKT)
Awsome!
I have not played the Call of Duty series for a very long time but ever since i picked up Call of Duty 4 Modern Warfare, i could never put down this game again. I own Call of Duty 4, 5 and now I have bought 6. I am very happy that Activision and Infinity Ward have continued the Modern Warfare series, I think there have/are enough World War games. and I hope that they do countinue and not go back to the old and over used theme.

I actually have Call of Duty 6 for Xbox 360, PS3, and now for PC!!!!! So that i can play this game with all my friends across all consoles.

For any FPS fan this is a must have in your collection. The Single Player is amazing and entertaining, the addition of the Special Ops mode again provides for a great load of fun. Not to forget the online game mode which has been legendary throughout the whole Call of Duty series.
yak55 (3) on 22, Feb. 2010 12:24 (HKT)
Realistic gameplay
This game is different from other FPSs. While usual FPSs settings are dark and gloomy, COD: MW2 has amazing and realistic scenery, with various settings in different biomes. The gameplay is also very realistic, with bodies falling to the ground the same way a corpse in real life would, and no exaggerated killing scenes such as blood spurts.
This game is also entertaining for people of various ages. Both my 48 year old dad and my 8 year old little brother enjoy it, and even have a nice time bonding over it.
deadprivacy (8) on 09, Feb. 2010 11:26 (HKT)
Substantial
Perfect. The only issue is short story.
deadprivacy (8) on 29, Dec. 2009 00:44 (HKT)
Applause to infinity
The atmosphere is excelent as the first one. The conflict between polar powers are evaluated so well, it's just like the initials of the third world. The veteran mode sometimes pins you down; but it's definitely worth it. The only issue is the lack of q and e keys for side eye sight. The rest is perfect.