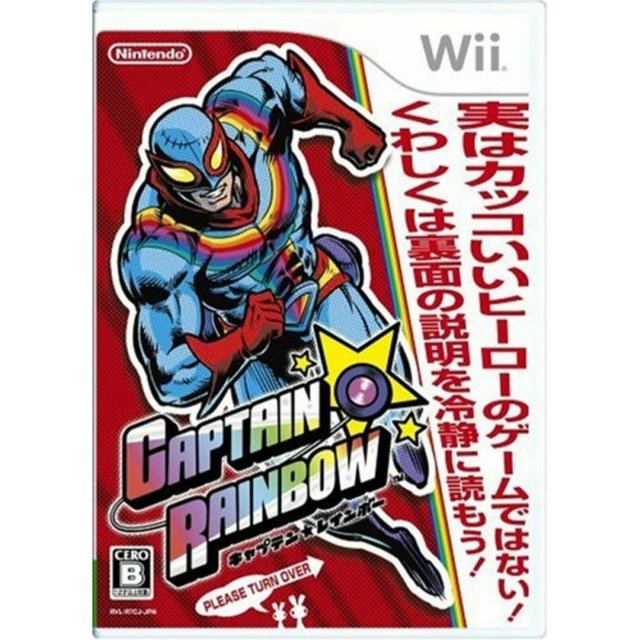 
Click on a thumbnail to see more pictures for Captain Rainbow

“This is not a game about a cool hero, for details, please calmly refer to the information inside.”Captain Rainbow, an alter ego of Nick was the hero of Mamerica, a land of freedom. But because of the emergence of new heroes and the lack of popularity with his own show, he ended up as a fallen.To remedy the situation, Nick set off to the legendary island Mimintou which is rumored to hold ceremonies that is able to grant any wish. When he arrived at the island, Nick met all sorts of people who also came with the hope that their wishes may be granted and somehow became their savior.Can he grant the other's wishes? And what about his own? What would you do Nick? What would you choose? Captain Rainbow!Nick's path to become a (popular) hero is indeed very rocky!

If you are familiar with Captain Rainbow, why not let others know?

Cmercur (17) on 18, Jan. 2015 16:04 (HKT)
Too
Not the best graphics on Wii, but here lies a hidden gem that never got released outside Japan. You get to help Nintendo's neglected characters that have gotten out of shape on the island as the faded hero Captain Rainbow.
jobson.quaresma (135) on 11, May. 2013 11:09 (HKT)
Great Game
This game is really awesome. It is a extremely odd game, but this is not a bad thing. Great to see several character from Nintendo World.

It's a pity it did not came to US, but if you have a japanese wii, and if you are a Nintendo Fan this game is for you.
aiukens (28) on 06, Nov. 2010 15:15 (HKT)
What a nice game!
Special game for the Wii as the previos comments say. But a must play, only keep in mind the handicap of the language (the game is only aviable in japanese).
Tenbatsu (74) on 12, Aug. 2010 09:17 (HKT)
Rainbow Power!
Great game that will not see the light of days in the west. Get this if you have a decent command of japanese language. Whacky fun!
ujnhunter (75) on 25, Mar. 2010 23:31 (HKT)
Funny Stuff!
From the makers of Chibi-Robo (amazing game btw!) comes Captain Rainbow! A fun filled adventure with wacky characters all around! I enjoyed the odd adventure very much, very enjoyable game!
1 »