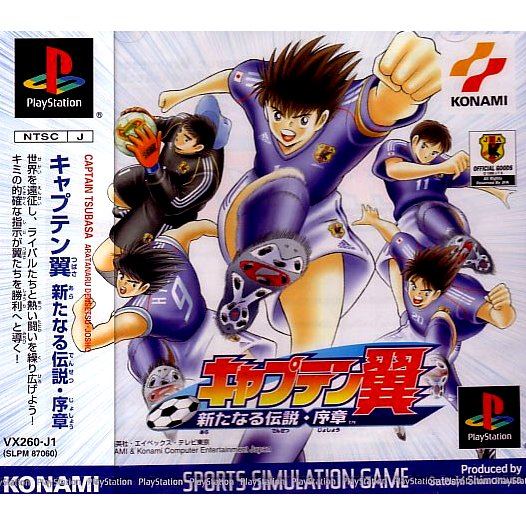 Konami
Compatible with PlayStation™ (PS™)
For JPN/Asian systems only.

The story focuses on the adventures of a Japanese youth soccer team and its football captain Tsubasa Oozora, whose name literally translates to "Big Sky Wings". The series is characterized by dynamic football moves, often stylish and implausible. The plot focuses on Tsubasa's relationship with his friends, rivalry with his opponents, training, competition, and the action and outcome of each football match.

In Captain Tsubasa - Aratanaru Densetsu Josho Tsubasa Ozora's soccer adventures continue as his team aspires to the world championship by taking on all contenders from around the globe. Similar to previous Captain Tsubasa games, play mechanics consist of watching the screen, assessing the situation, and selecting the appropriate action in order to score, attack or defend. Once chosen, the move is played out in cinematic spurts accompanied by dramatic sound effects.

As the soccer games pile up, each win boosts Tsubasa's team and skews the statistics favorably towards their "action luck." A soccer club with a winning streak will be boosted by their previous successes with improved probabilities in every kick, strike, or defense. Hapless opponents with fewer wins would then likely fall beneath your thunder...

If you are familiar with Captain Tsubasa: Aratanaru Densetsu Joshou, why not let others know?