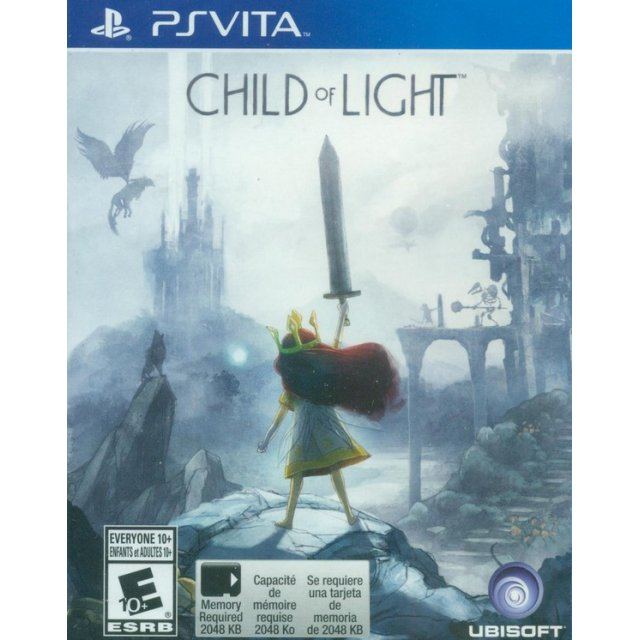 Works on all systems sold worldwide, a correct regional account may be required for online features.
1w Expected stock arrival within 1 week.
US$39.99
Manufacturer
Ubisoft
Rated By Our Customers
Compatible With PlayStation Vita (PS Vita)
Version

Works on all systems sold worldwide, a correct regional account may be required for online features.
1w Expected stock arrival within 1 week
Price
US$39.99
Play-Asia.com Return & Refund Policy
Click on a thumbnail to see more pictures for Child of Light

From the creative director of Far Cry 3, and the lead writer of Assassin's Creed Brotherhood, comes a fairytale inspired RPG: Child of Light! Take an extraordinary journey through the vast world of Lemuria, a magical land skillfully hand drawn and beautifully rendered in a watercolor style. Taking inspiration from the costumes and lighting of the world-renowned performing arts group Cirque du Soleil, explore Lemuria's mythical environments, interact with its inhabitants, discover new locations, and uncover long kept secrets!

Restore the light of Lemuria by retrieving the sun, the moon, and the stars stolen by the Dark Queen. Play as Aurora, the duke's daughter and the child of light, and embark in a fantastic quest to the breathing world of Lemuria to save the stolen sources of light. In this journey into Lemuria, Aurora will meet eccentric creatures - such as spirits of the forest, talking mice, wicked witches, and evil sea serpents. Given the power to hold the magical sword, Aurora must fight dangerous creatures along with the help of Igniculus, a living blue fire orb that guides and lights the young princess in her way through the dark world of Lemuria. Aurora is also given the ability to fly and with it she forges an incredible journey bigger than her dreams!

Child of Light features Active Time Battle Systems which utilizes classic turn-based RPG combat. Level up and use skill points to unlock over 200 unique abilities for Aurora and her allies. Solve challenging puzzles involving shadows and movable objects using the power of light to unfold hidden mysteries of the darkened world. Igniculus, the friendly ally can be controlled by another player, so you can enjoy this adventure with friends while fighting monsters and evil mythical creatures as you bring back the brightness of Lemuria's kingdom.

If you are familiar with Child of Light, why not let others know?