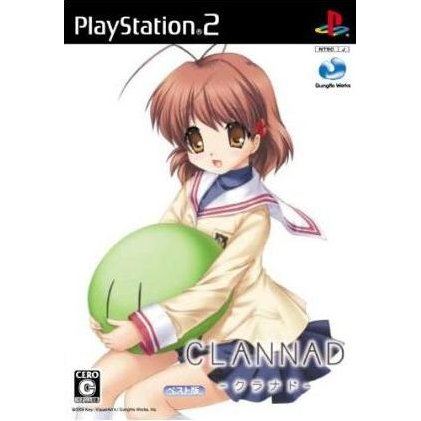 Collections
Interchannel
Compatible with PlayStation 2™ (PS2™)
For JPN/Asian systems only.

NTSC
24h In stock, usually ships within 24hrs. (Only 1 left in stock.)
US$34.99
Manufacturer
Interchannel
Compatible With PlayStation 2™ (PS2™)
Version

NTSC
24h In stock, usually ships within 24hrs
(Only 1 left in stock.)
Price
US$34.99
Play-Asia.com Return & Refund Policy
Click on a thumbnail to see more pictures for Clannad (The Best Edition)

The hero Tomoya is a delinquent with a strained relationship with his father. When he gave up basketball, one of his passions in life, he becomes unwilling to go to school. When he dawdled at the bottom of the slopes on the first day of school, he meets Nagisa, a girl who is just as hesitant as he is about going to school. Nagisa has been sick all her life, and during her third year of high school, she has to take a long break. Due to this, she is older than the rest of her classmates and is all alone since her friends have graduated. The game company Key specializes in interweaving all sorts of relationships into their plot, aside from the growing romance between Tomoya and Nagisa, the protagonists' relationships with their parents and friends are included to form a well rounded and touching story. 「Kanon」、「AIR」を送り出したビジュアルアーツのブランド「Key」が送る、待望の恋愛アドベンチャーゲームの第3弾がお求めやすいベスト版で登場!PC版では無かった音声を、人気声優によってフルボイス化。また、プログレッシブ出力対応により、美しい映像でゲームが楽しめます。

If you are familiar with Clannad (The Best Edition), why not let others know?

[This review is based on another version of this product]
osilru1 (4) on 29, Jul. 2019 13:03 (HKT)
Great Visual Novel
It's a great visual novel for all ages. It's a slice of life story about a touble student meet a girl.
It has great soundtrack and voice acting. IT has an english text option.
vio-deni (53) on 26, Aug. 2010 14:27 (HKT)
Clannad (The Best Edition)
One of the best visual novel that I played! Clannad is amazing! If you like vn genre with interesting stories or another romantic adventure games, yiu should buy it!
aasyranth (5) on 24, Oct. 2009 01:18 (HKT)
A Huge Slice of Life
(This review is for the PS2 version "Best" edition) As the title indicates, Clannad is HUGE. This visual novel can easily consume 300 hours of your life. The 48 episode anime series based from this is a severely abridged version of the story, just to give you an idea. As for the visual novel, this version is full-voice for every line of dialogue spoken, including material from bit characters that are not even shown. There are thirteen endings, twelve of which must be completed to reach the conclusion to the entire story. There are NO dirty scenes in any version of Clannad, so you don't have to worry about such content being shoe-horned in like you see with so many visual novels. All-in-all, Clannad is fantastic, and you'll feel like you've lived through a different life once you've gone far enough into it. (NOTE: A proficient Japanese reading level is needed for this game, and a strong understanding of the spoken word will help immersion. There are fan-translation patches for the PC version, but no such option is available for the PS2 release)