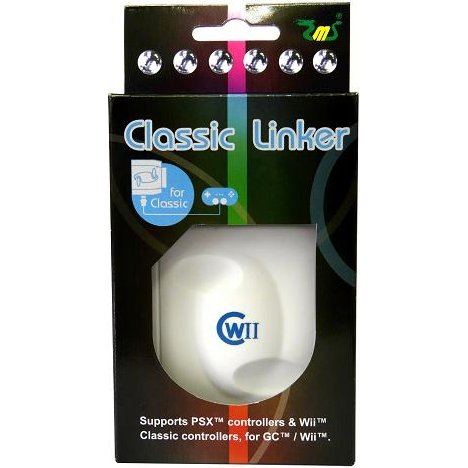 EMS
Rated
By Our Customers
Compatible with GameCube™, Nintendo™ Wii
Get informed when this item is in stock by using our Personal Agent from the right.

Tatsunoko vs. Capcom: Cross Generation of Heroes
US$ 39.99

If you are familiar with Classic Linker, why not let others know?

libertyernie (1) on 12, Apr. 2011 07:48 (HKT)
Works as advertised
Pros:
*It works with the Classic Controller and with a PSone controller
*It also works with the Nunchuk! (Z acts as A and C acts as Start)
Cons:
*It doesn't work with the Game Boy Player, which is disappointing. It works with every GameCube game I've tried.
*Pressing + (Start) and another button at the same time enables/disables rapid fire. If you want to press Start and another button at the same time, use - (Select) as the Start button instead.
niedemencji (2) on 01, Sep. 2010 11:19 (HKT)
It Good but not Great.
Honestly I will say this. It is a good alternative the clunky design of the gamecube controller but if you use it with a ps2 controller you will find that the joysticks on such are twice as sensitive as the gamecube and classic controller joysticks and can be difficult if playing first person shooters or games that have a lot of aiming. also the fact that on some gamecube games that have the sensitive l and r button usage like super mario sunshine and so on it will make play a little more difficult because there is no half pressing of the buttons on the classic or ps2 controller. not a bad buy tho worth it for the majority of the other games.
t4z (1) on 25, Feb. 2010 17:22 (HKT)
Good product
Works great with Wii´s classic controller, i bought this for replacing non original GC controller.
It would be nice feature if you could manually re-assign controller buttonsr.
seanraaron (10) on 12, Nov. 2009 07:26 (HKT)
No CC Pro support
For that you need the Classic Linker Plus.
seanraaron (10) on 25, Apr. 2009 17:49 (HKT)
Nice gadget for retro gamers that don't like the GC pad
This is a product long overdue. The Gamecube controller lacks a d-pad in a position usable for primary control so I've wanted to use either my PS dual analogue pad or Classic Controller for games like Mr. Driller Drill Land or Namco Museum 50th Anniversary.

Otherwise it works a treat!