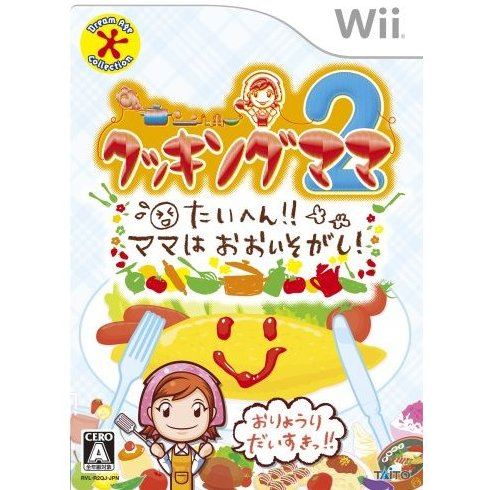 Mama is still cookin'! In her Wii sequel, Mama brings a lot more to the table, including all new 3D graphics, new recipes, comedic kitchen minigames, new gameplay modes and much more!

If you are familiar with Cooking Mama 2: Taihen! Mama wa Ooisogashi!!, why not let others know?

[This review is based on another version of this product]
marianamoreira12 (1) on 10, Dec. 2010 07:23 (HKT)
Cooking Mama
Great game, it's really hard when you first play it, but then it becomes kind of easy. The graphics are cute and it's really fun.
[This review is based on another version of this product]
toadette (1) on 22, Sep. 2009 14:34 (HKT)
Cooking Mama: World Kitchen review
World Kitchen brings simulation-cooking to Wii owners again, this time in 3D. Personally I prefer the graphical interface in the original Cooking Mama, where just about everything from characters to food are represented in cute 2D graphics with thick bold lines. Even though in making what you're cooking 3-dimensional is cool & that much more realistic, somehow something is lost in World Kitchen's translation of the lovable Mama.

Oh, and speaking of translations, Mama speaks slightly better Engrish this time round. However I cannot say the same for cooking instructions in this sequel. Players new to Cooking Mama would find the lack of a proper tutorial frustrating, as the tiny icons at the bottom of the screen that tell you how to move your Wiimote isn't clear. At all. Many times you'd find yourself burning food before understanding what the tiny icons mean.

Instructions aside, World Kitchen might appeal to those who like to create their own avatars. In this sequel, Mama stands beside you while you cook, and this "you" is entirely of your own creation. Long hair, short fringe, green hair, bandanna, the works...it's up to you.

What I absolutely cannot stand, though, are the minigames that trigger when you accidentally make a mistake. Flip a burger patty too hard? Mama to the rescue! Except that it involves once again confusing Wiimote instructions that you'd understand only after the minigame is over. Not only is it hard to play, the minigames also disrupt gameplay flow. I'd much rather see my beef patty on the floor, thank you very much.

All in all, if you like cooking but hate to get all messy in the kitchen, I'd recommend getting Cooking Mama: World Kitchen. It's a great game to get kids acquainted to cooking too, what with its bright cheery colours, oversized ingredients and all.