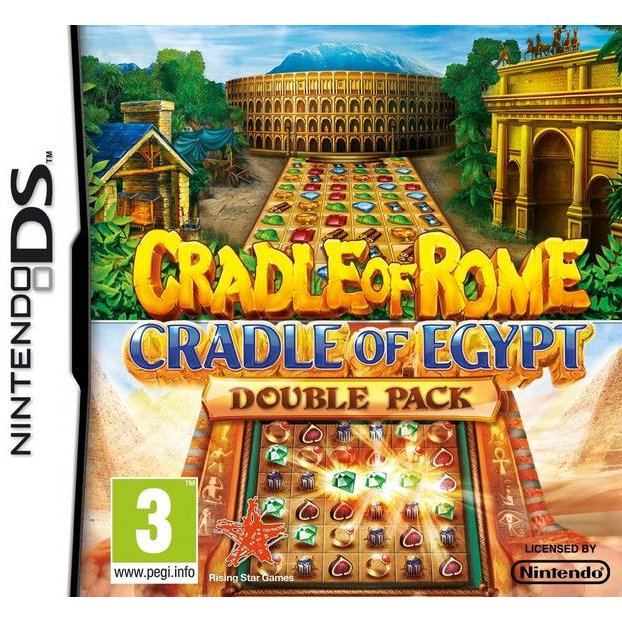 Cradle of Rome is a puzzle and strategy videogame developed by Cerasus Media. The player must flip jewels on a playing field to create matches of at least three items of the same type. As matches are formed, reserves of resources such as grain and wood are built up, which are used towards building the Roman Empire. Between rounds, resources can be spent on farms, taverns and other buildings to cultivate the commonwealth. The goal of each round is to form matches on blue tiles to clear them from the screen. Obstacles increase the game's difficulty; they include locked gems, which cannot be switched until a match is made to unlock them. Each round also has a time limit, which is represented by a slowly emptying vase of water on the top screen. To help the player, several power-ups can be acquired. However, the highlight is not to complete the board in the shortest time but to gather as many resources as you can before the timer runs out. The more you collect, the faster you can rebuild the ancient Roman civilization. Cradle of Egypt - The follow-up to Cradle of Rome, one of the best selling DS casual games of 2009, Cradle of Egypt perfectly combines addictive puzzle gameplay with an engaging resource management mechanic. Building upon all the key features that made its predecessor a success, Cradle of Egypt now provides gamers with all the great bonus items and tools reminiscent of those from ancient Egyptian mythology to use throughout the game, all with the goal of rebuilding this once powerful civilization. << less

No reviews for Cradle Double Pack yet.