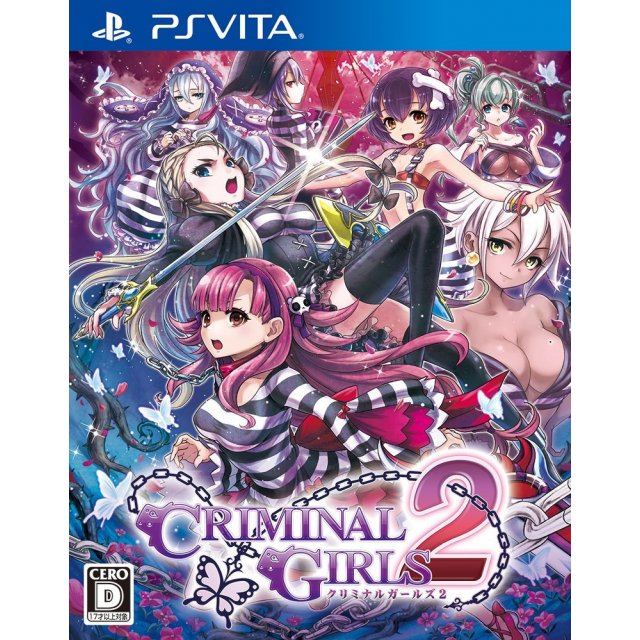 Works on all systems sold worldwide, a correct regional account may be required for online features.
24h In stock, usually ships within 24hrs.
US$46.99
Our previous price:US$ 74.99
You save: US$ 28.00( 37% )
Manufacturer
Nippon Ichi Software
Rated By Our Customers
Compatible With PlayStation Vita (PS Vita)
Version

Works on all systems sold worldwide, a correct regional account may be required for online features.
24h In stock, usually ships within 24hrs
Price
US$46.99
Our previous price:
US$ 74.99
You save:
US$ 28.00( 37% )
Play-Asia.com Return & Refund Policy
Trustpilot
Trustpilot
Click on a thumbnail to see more pictures for Criminal Girls 2

Considered as the final destination for some, Hell is a place of no escape - unless one decides to submit themselves through punishments of repentance...

In Criminal Girls 2, you are an adviser of Hell that controls the fates of 7 girls - bad and naughty sinners in their own rights. They must follow your every beck and call as you guide them through Hell's devious“Resurrection” Rehabilitation Program taking place in the Tower of Hell.

Of course, nothing is ever that smooth, especially if it concerns the underworld; each girl has their own unique personality - some shy, some lewd, some vivacious, and each has a dark past to uncover; you must steel yourself and commit to bringing these girls around through the only way you know how: saucy punishments masquerading asmotivational sessions!

As the sequel to Criminal Girls: Invitation, this Japanese version retains the uncensored punishment experience and is upgraded from the former in everyway; punishment scenes are now more imaginative, as the situations and positions the girls are in are a lot more novel, and all scenes are now done with a "breathing sprite" animation similar to Tokyo Twilight Ghost Hunters and Dragon's Crown.

Only through this intimate connection does one unlock a bond that punishment can give, and only through this, each girl's innate repertoire of skills unlock; Criminal Girls 2 will also feature a higher level of strategy than before; there is more balance between the RPG elements and the notorious punishment scenes. As well, the rear and front touch screen functionality makes a return, as players will be tapping away rhythmically with the goal of keeping punishment consistent at a brisk and steady pace~

If you are familiar with Criminal Girls 2, why not let others know?

[This review is based on another version of this product]
de_forest_peter (19) on 13, Jan. 2017 05:16 (HKT)
Intriguing Sequel
The genre is for a small niche but it delivers very well in terms of story and the mini-games I shall call them. The combat is a little lackluster with not being able to target enemies but overall a great game
dot.dot.you (77) on 11, Feb. 2016 09:27 (HKT)
No title
If you loved the first game then this second you cannot miss it! Eroness overflows!
[This review is based on another version of this product]
lukeparker (1) on 02, Jan. 2016 00:57 (HKT)
Excellent sequel
great graphics, combat system and girls! although bosses are much tougher than the standard enemies in each dungeon resulting in some major level grinding before each boss i'd definitely recommend this game. No need to know japanese to understand this game, it's pretty straight forward.
[This review is based on another version of this product]
markus.michalsky (2) on 28, Dec. 2015 20:38 (HKT)
Worthy Sequel
Very much like the first one, but with some enhancements, such as more options to develop each girl in a more offensive of defensive way and far more animations whatsoever.
The minigames appear quite a bit easier than before and you see some recycled monster sprites here and there, but that doesn't bother me at all.

Also a great game to import even if you don't understand one bit japanese (I do, though XD) since it's really easy and straight forward, but not in a boring way.

Overall いいゲームです. ;-)
[This review is based on another version of this product]
ebilodeau45 (24) on 24, Dec. 2015 21:37 (HKT)
Great Follow-Up
The game is fun and easy enough to figure out even without knowledge of Japanese. You don't need any knowledge of the first one to play, but is worth getting both.
1 »