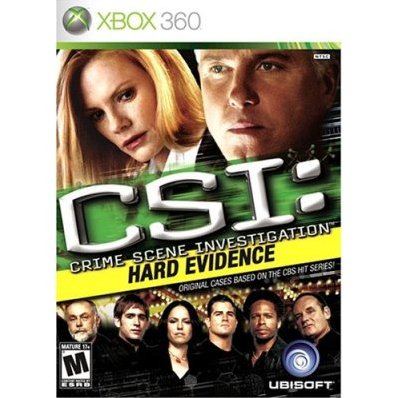 Works on all systems sold worldwide, a correct regional account may be required for online features.
1-2w Expected stock arrival within 1-2 weeks.
US$53.99
Our previous price:US$ 55.99
You save: US$ 2.00( 4% )
Manufacturer
Ubisoft
Compatible With Xbox360™ (X360)
Version

Works on all systems sold worldwide, a correct regional account may be required for online features.
1-2w Expected stock arrival within 1-2 weeks
Price
US$53.99
Our previous price:
US$ 55.99
You save:
US$ 2.00( 4% )
Play-Asia.com Return & Refund Policy
Trustpilot
Trustpilot
Click on a thumbnail to see more pictures for CSI: Hard Evidence

More Crime-Solving ActionBreak down the evidence and bring suspects to justice in five all-new, bizarre crimes. Unravel longer cases, search bigger crime scenes and uncover hidden evidence in unique locations like never before.Go Deeper into the EvidenceMaster new forensic tools and find more evidence than ever. Use the new Garage Lab to examine large pieces of evidence like cars and trucks. Recreate gunfights with ballistic lasers, uncover shocking secrets with video analysis, and much more.The Ultimate CSI ExperienceExperience your very own CSI episodes as you piece together clues with the real CSI actors. Take part in dramatic interrogations, create grisly crime reenactments and explore atmospheric crime scenes inspired by the show.Now on Next-Gen ConsolesFor the first time CSI fans will be able to play on the Xbox 360™ video game and entertainment system from Microsoft and the Wii™ home video game system from Nintendo. Use the Wii Remote™ to navigate through a crime scene or experience cinematic-style graphics on the Xbox 360. The user interface has been completely redone with a console audience in mind so that it is more user-friendly and more like the show than ever.

If you are familiar with CSI: Hard Evidence, why not let others know?

And a big thx at PLAY-ASIA for the fantastic Service !!!!!!!!
[This review is based on another version of this product]
banej88-xbox360 (33) on 08, Oct. 2007 01:02 (HKT)
Review on XBOX 360 CSI: Hard Evidence game
This is another title that was released without much or any promotion. It just appeared. And it does not seem to be available for local release, but good thing is the disc is region-free so your local console can run it.

Being a game that lets you play detective, graphics is one important factor especially for an environment that tries to mimic the real world, and for that this game scores decently close to what you get from Oblivion and Bioshock. I’m comparing with these two games because CSI: Hard Evidence is also presented in first person perspective. Actually in terms of graphics, it’s pretty much spot on with The Godfather, but there are glaring differences which I will explain later.

Like all new XBOX 360 games released from this quarter of 2007, this game can be played on 1080p, but I played the game on 720p with a normal Pro console and a 27inch HDTV. Good enough. No framerate issues or lag.

As a detective, you have to solve 5 different cases, one at a time. You do not have a choice on which case to pursue first. It is simply solving Case No. 1 to unlock Case No. 2 and so on.

You have a partner who follows you everywhere whom you can discuss the case with and other team members back in your headquarters who helps you with certain procedures.

Unlike Oblivion and Bioshock which allows full and free movement, you move around the vicinity only if the game allows you to. Your actions are limited to only those that is interactive to you. For example, instead of being able to access every nook and cranny of a house, you get to visit living room, kitchen and a fridge. Even your scope of vision is limited. Your cue is a green movement arrow which tells you whether you can access an area or if there is something of interest to look at.

While the movement is restrictive, I guess one good thing is it saves time traveling around. I spent the same time each night playing this game and I’m able to complete it in 2 nights, whereas Bioshock took me a couple of days!

The interesting part is when you access an item. Each item may be a piece of the whole puzzle or provide a further lead to a clue. If you locate a new clue, say a fingerprint on a bottle, you will be able to retrieve it using a host of detection and collection tools. Some clues are easy to spot but it gets harder in the later cases.

My favourite venue is the lab because this is where I get to piece the clues together. The satisfaction of discovering something new is always rewarding.
When you interact with team members or with the persons of interest, you will be given a few dialogue lines to choose from. After getting a response, you then proceed to choose the next available dialogue line and proceed on from there.

In a nutshell, it’s pretty much linear. There are no two ways to solve a case. Trigger the appropriate clues or the game will not proceed. There was once I ended up traveling to all the different locations just to access any new dialogue line/clue just to let the case proceed.

At the end of solving the case, you will be sent for evaluation. It tells you whether you have located all necessary clues and have looked at everywhere possible. You will unlock bonus items if you attain a Master Rank but even if you don’t, you will still get your achievement points.

This game only has 5 achievements – 200G, just for solving each case. So if you’re rushing through the game, don’t bother about getting Master rank and earning bonus items.

For a detective game, this game has provided the basics.

Intriguing opening cutscene, surprise twists and unexpected ending. Yes, all 5 cases do not have the ending you quite expect it to be. Either that or I’m just not cut out to be a detective. I’m not sure whether these cases are taken from the actual TV series.

The characters in CSI:Hard Evidence have more emotion and facial expressions than those you see in Oblivion. Voice acting is superb. Makes you feel as though these characters are alive. The stories may not be as deep as Bioshock but enough to keep you going, especially when the twists hit you.

On one scene, my teammate and I were inspecting a house and I chanced upon a piano. When I first played it (by interacting with it), my teammate appreciated it. The second time I played it, she shook her ahead. I felt that was hilarious and added depth to the character.

As mentioned before, this game has about the same graphics engine as The Godfather, but while you get to experience more in The Godfather, but you can’t help feeling lonely in CSI: Hard Evidence. Set in Las Vegas, you do not see any other characters around other than your team members and the persons involved in the case. Not even yourself or any part of your body. With the intense action you saw in other single-player campaign games like Oblivion and Bioshock, it just makes you wonder whether the capabilities of the XBOX 360 have been fully maximized in this game.

Even with limited stuff going on at a time, the game is not perfect. For example, at the beginning of the game, you are asked to input your name but I see no reference to it in the game. On one scene, I tried to get the DNA of a lady by capturing her lipstick marks from her drink. Funny thing is she was looking at her drink and did not react when I took it away. It would have been more realistic if she had left the scene or had turned away.

Detective games, especially one based on a television series are few and far between. If you’re looking for something different, try this out. Good for growing your Gamerscore points too.

There’s not much replay value other than to get bonus items or to locate all possible clues. Other than that, it’s a cool addition to the game library. My girlfriend loves watching CSI and I might use this to get her acquainted to the Xbox 360.