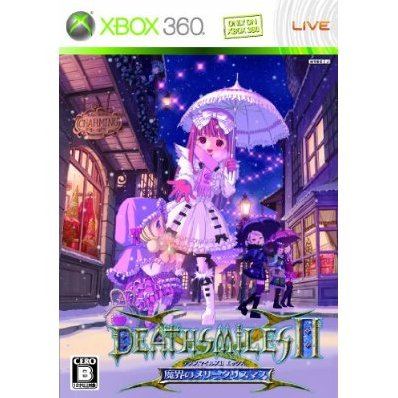 Collections
Cave
Rated
By Our Customers
Compatible with Xbox360™ (X360)

Death Smiles II, the sequel to the hugely popular Death Smiles is coming in May. This is not only a port, but a upgraded version. The graphics are updated to full 16:9 HD splendour. Look at the screen shots, the gothic fantasy world and their fire spitting monsters have never been so beautiful.Besides visuals, we have two more characters, Roza, affiliated with a fairy and Foret who has a dragon. Let's see what stories and their special bullets they have.Meet the new monsters and bosses. The Xbox360 version has two new stages, Meiro - Shiroi yami no naka (Labyrinth - In the White Darkness) and Hairakuen - Mihatenu yume no kuni (Forgotten Paradise - Land of the endless dreams). Fly into them and test your skills against the new bosses Tartarus and the Mad Teddy and Bunny.This is a game everybody can enjoy, like the previous installment, you can choose the difficulty settings according to your own skills.

If you are familiar with Death Smiles IIX, why not let others know?

Another fantastic job by Cave!
[This review is based on another version of this product]
e_pedraza_g (517) on 02, Dec. 2011 11:47 (HKT)
Great Smup
A Nice sequel. This one uses environments and characters entirely rendered in polygons... so it requires a bit of time getting used to...
1 »