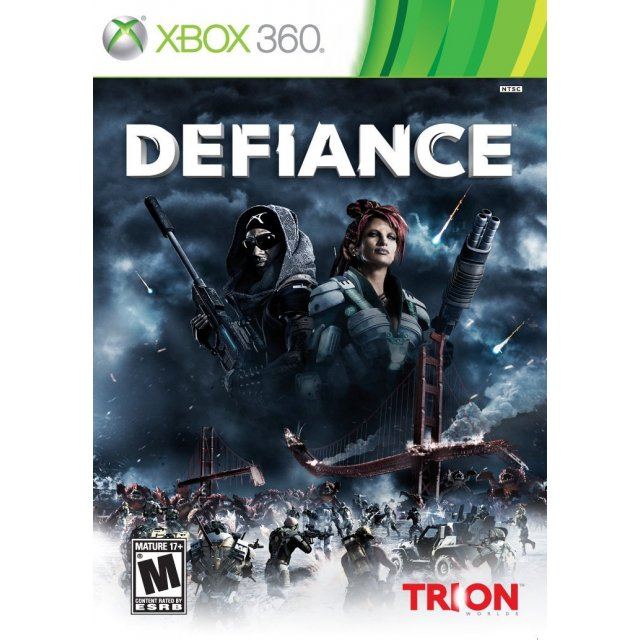 Works on all systems sold worldwide, a correct regional account may be required for online features.
24h In stock, usually ships within 24hrs.
US$24.99
Our previous price:US$ 59.90
You save: US$ 34.91( 58% )
Manufacturer
Trion Worlds
Rated By Our Customers
Compatible With Xbox360™ (X360)
Version

Works on all systems sold worldwide, a correct regional account may be required for online features.
24h In stock, usually ships within 24hrs
Price
US$24.99
Our previous price:
US$ 59.90
You save:
US$ 34.91( 58% )
Play-Asia.com Return & Refund Policy
Click on a thumbnail to see more pictures for Defiance

Defiance is the first multi-platform shooter MMO which, in a ground-breaking entertainment experience, interconnects with a global television series on Syfy, cable’s premier imagination based entertainment channel. The game is being developed by Trion Worlds for the PC, Xbox 360® video game and entertainment system from Microsoft, and PlayStation®3 computer entertainment system.In Defiance players and viewers are introduced to a world where humans and aliens live together on a planet ravaged by decades of conflict. The game combines the intense action of a 3rd person shooter, with the persistence, scale, and customization of an MMO, while its TV counterpart exudes the scope, story, and character-driven drama of a classic sci-fi epic. Because they exist in a single universe, the show and the game will influence each other and evolve together over time, with actions in both mediums driving the overall story of Defiance.The creative forces behind Defiance have worked on the top online games of the past decade, including RIFT, Everquest, and Borderlands.Xbox live account membership is require to play this game