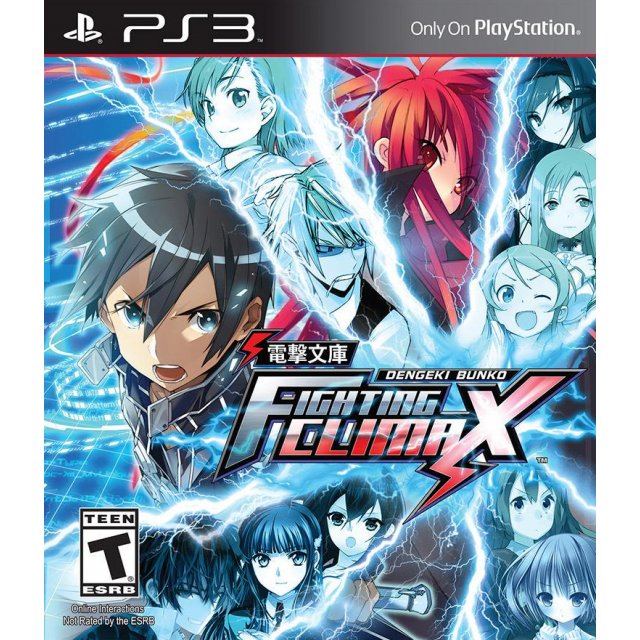 Works on all systems sold worldwide, a correct regional account may be required for online features.
24h In stock, usually ships within 24hrs.
US$34.99
Our previous price:US$ 37.99
You save: US$ 3.00( 8% )
Manufacturer
Sega
Rated By Our Customers
Compatible With PlayStation 3™ (PS3™)
Version

Works on all systems sold worldwide, a correct regional account may be required for online features.
24h In stock, usually ships within 24hrs
Price
US$34.99
Our previous price:
US$ 37.99
You save:
US$ 3.00( 8% )
Play-Asia.com Return & Refund Policy
Click on a thumbnail to see more pictures for Dengeki Bunko: Fighting Climax

Celebrating the '20th Anniversary of Dengeki Bunko' French Bread (UNIBEL, Melty Blood), along with theSega and ASCII Media Works,arebringing us another exciting 2D fighter straight from the arcade to our Sony consoles! The title will includecharacters fromDengeki Bunko's extensive line of light novelssuch asSword Art Online, Shakugan no Shana, andDurarara!going toe-to-toe on stages based on Sega franchises. Expect to see even more of your favorite characterssprinkled in amongst the roster as we get closer to release!

Dengeki Bunko: Fighting Climaxgameplay will feel familiar to any fan of anime/2D fighting games.The game uses a standard eight-way joystick and four buttons: A (weak attack), B (medium attack), C (strong attack), and D (support, to summon support characters) as well as standarddash, back dash, and two levels of jump - and of course the available combos. The console version will be shippingwith"Dream Duel" mode which allows players to enjoy conversation events between the characters, online "Network" mode, as well asunlockable extraslike costume colors, themes, and individual illustrations and animationsfor characters!

If you are familiar with Dengeki Bunko: Fighting Climax, why not let others know?