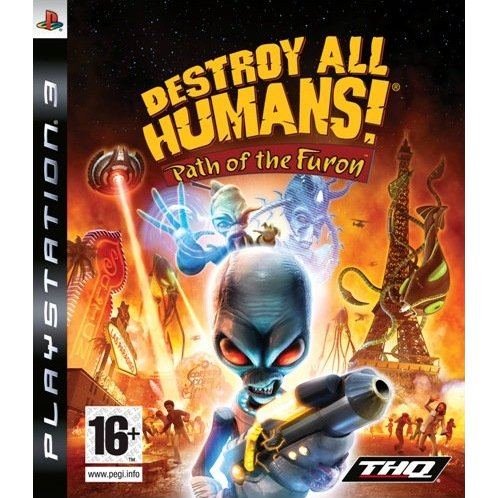 sold Out of print / Out of stock.
Manufacturer
THQ
Compatible With PlayStation 3™ (PS3™)
Version


Click on a thumbnail to see more pictures for Destroy All Humans! Path of the Furon

Destroy All Humans!® Path of the Furon™ takes players on a journey of Destruction and Enlightenment in the Funked Out '70's. The newest installment in the acclaimed franchise, redefines the brand's irreverent Sci-Fi action gaming experience for the next-generation Xbox 360™ video game and entertainment system from Microsoft and PLAYSTATION 3 system with new weapons and mental abilities, high-fidelity destruction and expanded open-world gameplay.

In Destroy All Humans! Path of the Furon, players will pick up where prequel Destroy All Humans! Big Willy Unleashed leaves off, controlling Crypto in the Funked out 1970's when mysterious new enemy attacks Earth, sweeping Crypto up in a conspiracy that unravels his groovy new way of life and threatens the very survival of the Furon race. Players will take Crypto on a journey of Enlightenment and Destruction as he gains new powers from an alien Kung Fu Master in order to take on his most difficult enemy yet - his own kind.

If you are familiar with Destroy All Humans! Path of the Furon, why not let others know?

[This review is based on another version of this product]
PuNiao (365) on 19, Feb. 2009 16:36 (HKT)
Destroy this game
Take a game about annoying aliens, 1970s disco, polygon-shaped buildings and vehicles, throw in some bad dialogue and the end result is Destroy All Humans! Path Of The Furon. A sequel to the silly but enjoyable Destroy All Humans! franchise, where aliens harvest human DNA, this game proves that spending too much time on Earth can render the most interesting of alien cultures boring. Left on Earth, the alien Crypto ends up running a casino, partly to draw in fresh human DNA while lining his pockets on the side. If the insane plot does not have your eyes glazing over by now, think about going forth in an environment so bland, it feels as if the game was a leftover from the original Xbox console. In this game, characters and buildings are flat and in the background, a single shade of red represents the sky.

As the title suggests, the game is about killing humans so it throws countless weapons at you - from death rays to bombs. However, each is no different from the other, in that it inflicts massive pain on (and kills) humans. With a name like Anal Probe as a weapon, would you expect anything less? The problem is that humans react the same way with each weapon - by running away and, at times, directly at you. This results in aimless shooting in the hopes that you hit something. After several bouts of mass destruction, the lack of retaliation makes it a chore to kill any thing anymore. Another bore is the cringe-inducing dialogue through which aliens take cheap shots at life in the 1970s, from disco to bell-bottoms. After a while, you just want to toss the controller at the screen and tell them to leave already.