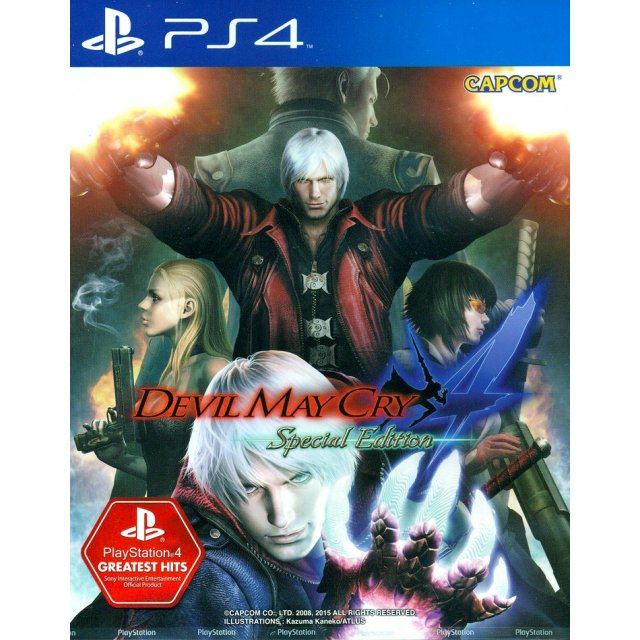 Works on all systems sold worldwide, a correct regional account may be required for online features.
24h In stock, usually ships within 24hrs.
US$29.99
Manufacturer
Capcom
Rated By Our Customers
Compatible With PlayStation 4™ (PS4™)
Version

Asian editions of DMC4: SE will have English and Japanese voices, and subtitles!

For the uninitiated, the original Devil May Cry series brought forward the idea of playing with style; with breakneck speeds, intricate and acrobatic combos, perfect controls, and an intense presentation filled with the Capcom-esque grit reflecting the trends of the time, Devil May Cry is a direct influence to many of today's similar titles.

Seven years after the original launch, Capcom is bringing back Devil May Cry 4 - the publisher's first PS3 title with Devil May Cry 4: Special Edition. On the PS4 and Xbox One, with a treatment similar to their recent revival withResident Evil: HD Remaster, DMC4: SE will have new game modes, gameplay, and visual improvements, and perhaps the most exciting aspect for fans, the largest playable roster in any DMC game yet!

Speaking of the roster, fan favoriteVergil is playable, with his appearance based on his rendition from Devil May Cry 3: Dante's Awakening Special Edition. Gameplay wise, a new mechanic is introduced known as"Concentration", which complements Vergil's taijutsu style rewarding players with progressively stronger attacks when fights are executed calmly without the dependency of button mashing. This combined with the "Grim Trick" teleport ability, will not only challenge veterans and newcomers alike but offer a distinct experience separating Vergil from both DMC mains Dante and Nero.

While Trish is a returning playable character, her biggest change is removable of her previous style of weapon switching, and now instead uses the Sparda sword in a multitude of ways without complex button combinations; although this may sound simple, it is far more difficult to excel with simplicity, and this newplay style will be something to look forward to.

If you are familiar with Devil May Cry 4 Special Edition (Greatest Hits) (Multi-Language), why not let others know?

[This review is based on another version of this product]
neo saviour (66) on 15, Jan. 2020 11:23 (HKT)
5/5
Nice game and lots of improvement compared to the previous installments. Best part is able to select Japanese voice with English subtitles. A must for Onechanbara fans!
mourjyagamer (2) on 12, Jun. 2019 16:27 (HKT)
Really good game
This is the best version of DMC 4 with dual audio and subtitle support.
[This review is based on another version of this product]
hyosuke (37) on 27, Apr. 2019 02:43 (HKT)
enjoyable
slow pace game, easy to win
jonathanbulling (1) on 23, Apr. 2019 08:39 (HKT)
Amazing Game
Great Game, nice Box (especially if there was no boxed Version available in your country), quick and safe delivery. No more words needed, just perfect :3
[This review is based on another version of this product]
JpaxxX (10) on 12, Apr. 2019 15:45 (HKT)
Good B-Movie game
SGZH is a game that can be compared to the Onechanbara or Senran Kagura series (but is more in the Onechambara vibe), whether it is from a technical perspective, the b-movie action and setting, and, of course, the sexiness displayed (and here which even as effect on gameplay). So if you like this kind of games, there is no reason for you to let this one unoticed, especially at this price. It's a good game even though playing too long sessions in a row may let some boredom settle (due to the repetitiveness of this kind of games).