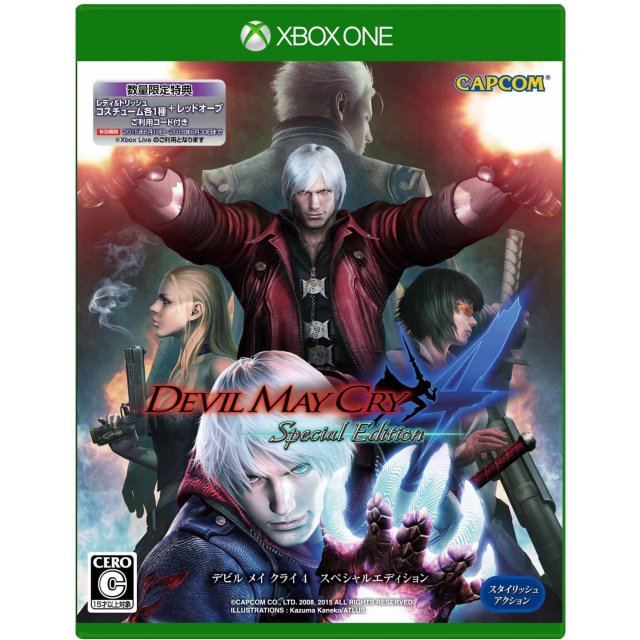 Collections
Capcom
Rated
By Our Customers
Compatible with Xbox One™ (XONE™)

sold Out of print / Out of stock.
Manufacturer
Capcom
Rated By Our Customers
Compatible With Xbox One™ (XONE™)
Version

For the uninitiated, the original Devil May Cry series brought forward the idea of playing with SSStyle; withbreakneck speeds, intricate and acrobatic combos, perfect controls, and an intense presentation filled with the Capcom-esque grit reflecting the trends of the time, Devil May Cry is a direct influence to many of today's similar titles.

Seven years after the original launch, Capcom is bringing back Devil May Cry 4 - the publisher's first PS3 title with Devil May Cry 4: Special Edition. On the PS4 and Xbox ONE,with a treatment similar to their recent revival withResident Evil: HD Remaster, DMC4: SE will have new game modes, gameplay and visual improvements, and perhaps the most exciting aspect for fans, the largest playable roster in any DMC game yet!

Speaking of the roster, fan favoriteVergil is playable, with his appearance based on his rendition from Devil May Cry 3: Dante's Awakening Special Edition. Gameplay wise, a newmechanic is introduced known as"Concentration", which complements Vergil's iajutsu style rewarding players with progressively stronger attacks when fights are executed calmly without the dependency of button mashing. This combined with the "Grim Trick" teleport ability, will not only challenge veterans and newcomers alike, but offer a distinct experience separating Vergil from both DMC mains Dante and Nero.

While Trish is a returning playable character, her biggest change is the removable of her previous style of weapon switching, and now instead uses the Sparda sword in a multitude of ways without complex button combinations; although this may sound simple, it is far more difficult to excelwith simplicity, and this newplay style will be something to look forward to.

Along with all the improvements and additions, extra features see the implementation of the "Legendary Dark Knight Mode," which was missing from the original PS3 version; players will be facingconstant pressure as this mode places them against a monstrous amount of enemies - only those with adept skills or veterans looking for an even more extreme experience will find solace here.

Finally, expect to see a veritable wardrobe of new costumes for each character, compatible with in-game cut scenes as usual with Capcom titles, just for that added visual freshness!

Look forward to one of most exciting series of our time, with Devil May Cry 4: Special Edition - releasing this SSSummer!

If you are familiar with Devil May Cry 4 Special Edition, why not let others know?

Still, DMC4SE is a must for those that love DMC and this version of the game easily the best one available. The digital release in the west has no Japanese audio and it replaces songs that are available in the Asian and Japanese versions with the old music from Dante and Nero making the music even more repetitive. The Japanese version only has English and Japanese support so if you don't speak either, though. This one has the advantage of having all the menu and subtitle language support that the western release did and the Japanese audio.

The only issues I have is that despite being a "Greatest Hits" version of the game this one doesn't include the DLC that was released for the game and it will only work if you got the DLC from the Hong Kong store and this game has the same layout as any Japanese game where X is cancel and O is confirm which takes some getting used to.
1 »