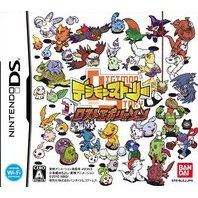 The third (or fourth, depending on how you're counting the games) in the Digimon Story series, this game takes place after Moonlight/Sunburst.The evolution of Digimon is determined by the Evolution Tree, but this has been destroyed by a mysterious organization called the Selecters, who have been going around and "selecting" which Digimon get to live or die. The Tree is made up of plates, and if a plate is lost, no Digimon will be able to evolve into that form until the plate is replaced. However, along with the appearance of Selecters, all the Tamers in the world have disappeared mysteriously.It is at this time that you, the protagonist, journey to the Digital World along with your friends, who've stowed away/been kidnapped by the Numbers, a group within Selecters. With Digimon acknowledging you as a new Tamer, you are given the responsibility of saving their World, as well as restoring their Evolution Tree.The game holds many of the same raising mechanics as Moonlight/Sunburst, and also adds the repairing function, which you use to repair the plates you find before placing them on the Evolution Tree.

If you are familiar with Digimon Story: Lost Evolution, why not let others know?

enzobu7 (2) on 04, Jun. 2017 17:06 (HKT)
HugeStepForward
This game has perfect amount of evolutions of digimons, this game is lenghty in a good way, graphics have taken a leap forward and are the best of Nintendo ds games, great story and perfect feel of playing this game.
santaskid (1) on 29, Oct. 2010 09:40 (HKT)
Amazing Game, Best so far.
Lost Evolution is a great improvement over the past games in the Digimon Story franchise. As a game they've made some changes, though I wish there had been a few digimon in the game that didn't make it in, over all I find it to be a sound game.

The Digiplate system at first is very different so it took some getting used to but the large array of evolutions, as well as the ability for a single digimon to evolve from multiple digimon is an much welcome improvement.

Digimon story, and the second games Moonlight/Sunburst. were alright games. While the first lacked much reason to level up over level 50-60, the second made leveling almost a requirement, yet it was hard to power up your digimon.

This game is more balanced power up digimon is much easier, and for some parts in the story a strong team is almost a requirement, though you can still get by under leveled as long as you have top notch attacks that your opponents are weak against.

Over all this is my favorite game out of the franchise so far, many changes in the evolution lines, the fact that plant and insect are now their own species instead of being lumped together. And all the locations from the first two games, plus a few more.

The field abilities are also a welcomed addition they add more depth to the game in my opinion.
terracannon876 (12) on 14, Aug. 2010 02:25 (HKT)
improvement
For those who've kept up with the Digimon Story games, this game is the best one, in my opinion. It is a definite improvement over the Moonlight/Sunburst's insane encounter rate, and there are more Digimon than in the first game.

What's different about this game? There's more story than in the first game (I never really finished the second to tell), and there's the addition of the Evolution Tree and Plates. In order to evolve into the Digimon you want, you first have to make sure that it's in the Tree; if it's not, then you have to find the plate (usually from random battles), fix it up, and put it in. For example, the Togemon plate is dropped by Tanemon early in the game.

Fixing up the plate is sort of like a required minigame. You have 3 tools -- putty, scraper, and cleaner -- to clean up the plate. Sometimes, there are also chunks of crystal (Crystal Bugs) growing on your plate, which need to be cleaned off with laser first. The whole plate needs to be done in approximately one minute. Luckily, if you don't finish repairing the plate, you don't lose it (unless you made too many mistakes). You just get a lower score. The higher the score, the more skills a Digimon can learn when in that form.

Most everything else is very similar to the previous games, I think. I'm really enjoying it, and it looks like it'll be up for 40 hours of gameplay, quests included.