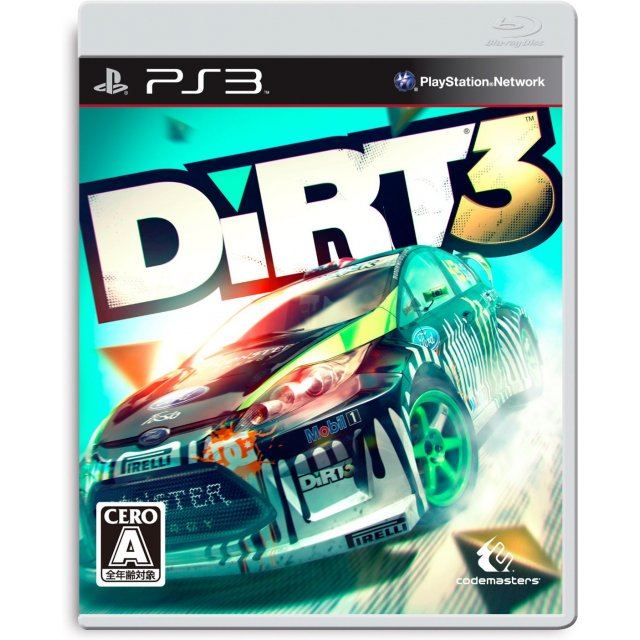 Collections
Codemasters
Rated
By Our Customers
Compatible with PlayStation 3™ (PS3™)

Works on all systems sold worldwide, a correct regional account may be required for online features.
1w Expected stock arrival within 1 week.
US$49.99
Our previous price:US$ 77.70
You save: US$ 27.71( 36% )
Manufacturer
Codemasters
Rated By Our Customers
1w Expected stock arrival within 1 week
Price
US$49.99
Our previous price:
US$ 77.70
You save:
US$ 27.71( 36% )
Play-Asia.com Return & Refund Policy
Click on a thumbnail to see more pictures for Dirt 3

DiRT 3 is set to deliver action sports racing by the bucketful with more than double the track content of DiRT 2 and three times the amount of rally-specific content, including the best rally cars from the last 5 decades of the sport. In DiRT 3, players start at the top as a professional action sports driver, with a top-flight career in fiercely competitive off-road racing and a sideline in incredible Gymkhana-style showpiece driving events. As players race to elevate their global standing, DiRT 3 delivers mud, sweat and gears the world over: from the intense weather-beaten rally stages of Europe, Africa and the US, to executing performance driving showcases and career challenges in a massive free-roaming environment.As a race professional, players will compete against the new generation of off-road superstars, including WRC competitor and Gymkhana star Ken Block and reigning IRC champion Kris Meeke. With customisable driver aids and difficulty settings, DiRT 3 is designed to be driven by all comers – from those who need a helping hand to take the tightest corners to those that want to switch off all support and drive a pure physics-based racer. The culmination of 15+ years experience in creating racing games, DiRT 3 features the most amount of content and cars in a Codemasters game, integrated social network features, and for the first time in the series, split-screen racing. Developed using the EGO™ Technology Platform, DiRT 3 will take action sports racing to the next level, setting the new benchmark for stunning graphics, astonishing damage and authentic handling. You’ll be amazed what you can do with a top-spec rally car.

If you are familiar with Dirt 3, why not let others know?