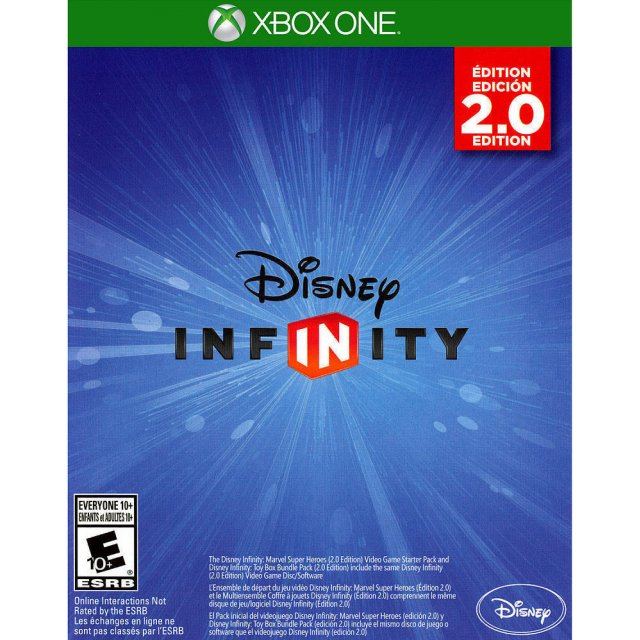 Works on all systems sold worldwide, a correct regional account may be required for online features.
1-2w Expected stock arrival within 1-2 weeks.
US$32.99
Manufacturer
Disney Interactive
Compatible With Xbox One™ (XONE™)
Version

Works on all systems sold worldwide, a correct regional account may be required for online features.
1-2w Expected stock arrival within 1-2 weeks
Price
US$32.99
Play-Asia.com Return & Refund Policy
Click on a thumbnail to see more pictures for Disney Infinity 2.0

Disney and Marvel together in One Pack:

Heroes and villains, sorcerers and superheroes, princesses and pirates have all come together for the new Disney Infinity game. For a long time, Disney and Marvel have ignited our imaginations with characters, magic, action, and adventure. Now, bring your imagination to life as Disney and Marvel invites players and fans to enter the magical yet action-packed world of Disney Infinity!

Disney Infinity: Marvel Super Heroes 2.0 Editionoffers endless possibilities to create new adventures and features more than 20 new interactive figures from the Marvel Universe. Players will use the interactive Marvel figures to activate original storyline (Play Sets) in the virtual game worlds of some of Marvel’s most iconic franchises, including The Avengers. Marvel enthusiasts can now interact with their beloved Marvel characters including Captain America, Iron Man, Black Widow, Thor, Hulk, and Hawkeye in completely new ways with an exciting gameplay and a new array of collectible interactive figures.

An all-new Toy Box mode that makes it easier for players to create, customize, and share their unique experiences and mini-games with family and friends. All characters and power discs from previous Disney Infinity game will be compatible with the Disney Infinity: Marvel Super Heroes 2.0 Edition Toy Box. Introducing the popular and iconic Marvel characters to the Disney Infinity truly take this game to the next level!

No reviews for Disney Infinity 2.0 yet.