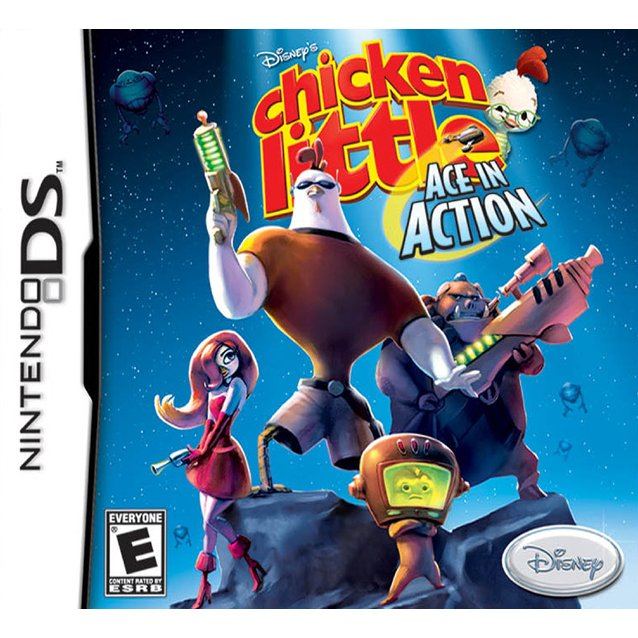 Works on all systems sold worldwide, a correct regional account may be required for online features.
24h In stock, usually ships within 24hrs. (Only 1 left in stock.)
US$20.69
Limited time offer - Secure yours now before the offer expires!

Inspired by the “movie within the movie” finale of Walt Disney Pictures’ box office hit film “Chicken Little,” Disney’s Chicken Little: Ace in Action features Ace, the superhero alter ego of Chicken Little, and the Hollywood versions of his misfit band of friends: Runt, Abby and Fish-Out-of-Water. The crew faces off against Foxy Loxy and her evil Amazonian sidekick, Goosey Loosey, who have an evil plan to take over Earth. Battle evil alien robots through multiple levels across the solar system and combat your foes in one of three distinct game play modes: Ace on foot as a soldier, Runt as the driver of an armored tank and Abby as the pilot of a spaceship. The original Chicken Little and his friends Abby, Runt and Fish we know from the film are featured in cut scenes throughout the videogame. Chicken Little receives a copy of the latest video game starring his super hero alter ego and invites his friends to come over and play it with him, in effect creating a “video game within a video game.” The look and feel of Disney’s Chicken Little: Ace in Action is an over the top parody of 1950s sci-fi films inspired by the glimpse into Ace’s world from the film.

No reviews for Disney's Chicken Little: Ace in Action yet.