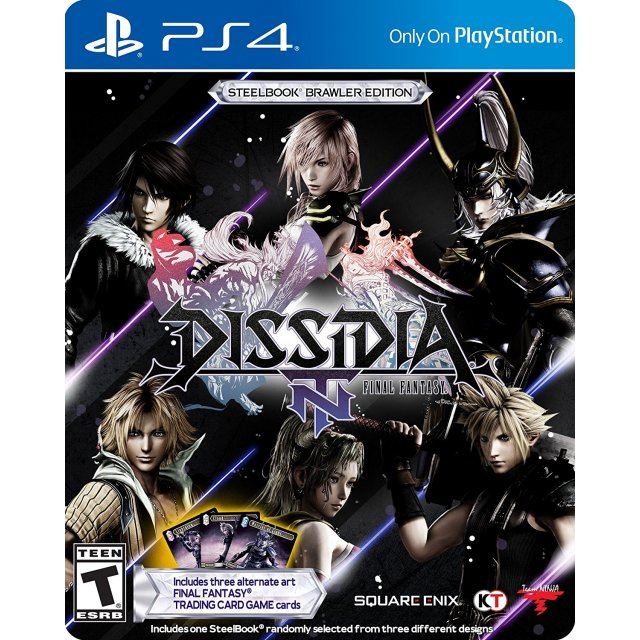 Works on all systems sold worldwide, a correct regional account may be required for online features.
24h In stock, usually ships within 24hrs.
US$34.99
Our previous price:US$ 59.99
You save: US$ 25.00( 42% )
Manufacturer
Square Enix
Rated By Our Customers
24h In stock, usually ships within 24hrs
Price
US$34.99
Our previous price:
US$ 59.99
You save:
US$ 25.00( 42% )
Play-Asia.com Return & Refund Policy
Trustpilot
Trustpilot
Click on a thumbnail to see more pictures for Dissidia: Final Fantasy NT [Steelbook Brawler Edition]

Pre-Order now to receive one of the three steelbook cases. Steelbook case chosen at random.

If you are familiar with Dissidia: Final Fantasy NT [Steelbook Brawler Edition], why not let others know?

[This review is based on another version of this product]
thawepong (123) on 25, Aug. 2018 13:57 (HKT)
excellent
very beautiful fighting game
carlospenajr (95) on 17, Apr. 2018 04:31 (HKT)
A little disappointed...
Even is this game has all the gameplay from previews Dissidias games, it been focused on on-line play is quite a set down.
But at least there's a lot o things to do and characters to play with
kingcloud7 (13) on 16, Mar. 2018 16:34 (HKT)
CLOUD!
I got Cloud steelbook! Yeah!
memphiskite (13) on 08, Mar. 2018 12:16 (HKT)
You'd enjoy this more from an arcade machine
To be honest, I was left feeling disappointed about this game, and if you are like me and kept comparing this game to the PSP game (Dissidia 012 duodecim), you will realise the game modes have changed completely, and only the combat mechanics stayed the same.

As long as you stop comparing this game to the Dissidia 012 duodecim PSP game, you could find some enjoyment from this new HD game. Otherwise, you're better off waiting to see it in the bargain bin of some sort.
xeoxes_noah (1) on 28, Feb. 2018 09:00 (HKT)
Cool!!!
Cool steel and Cool screen!!!