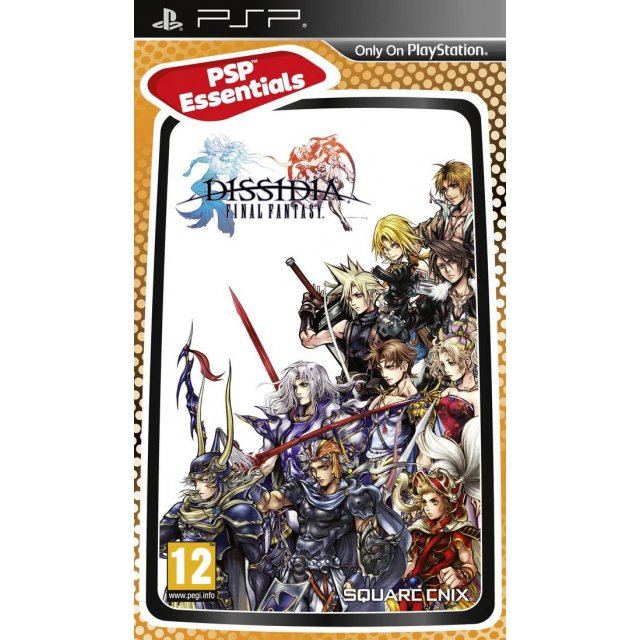 Works on all systems sold worldwide, a correct regional account may be required for online features.
1-2w Expected stock arrival within 1-2 weeks.
US$18.29
Our previous price:US$ 29.90
You save: US$ 11.61( 39% )
Manufacturer
Square Enix
Rated By Our Customers
Compatible With Sony PSP™ (PSP™)
Version

Works on all systems sold worldwide, a correct regional account may be required for online features.
1-2w Expected stock arrival within 1-2 weeks
Price
US$18.29
Our previous price:
US$ 29.90
You save:
US$ 11.61( 39% )
Play-Asia.com Return & Refund Policy
Trustpilot
Trustpilot

The International version of Dissidia has updates and adjustments that the original Japanese version lacks. Don't worry, though. Here, with Universal Tuning, all gamers can enjoy these new functions.There are more than 100 minor and major adjustments, characters have new abilities and strengths and these changes the rhythm of your battles. There is a new Arcade Mode where you can engage in time attack battles. Those who have beaten the game, use your save data to access the new aspects of the fighter.Last but not least, you have a chance to hear the English voice actors act out your favourite characters. Subtitles will be in Japanese and you can choose between English and Japanese voices during the battles.Released to celebrate the 20th anniversary of the title, the game is a crossover between Final Fantasy I to XII. Characters from all these 12 games make their appearances along with updated character themes and maps.Spend your brave points and launch familiar skills and plan your battle strategies by equipping the many abilities and items. This is a battle you have been waiting for in the last 20 years, join today.

If you are familiar with Dissidia: Final Fantasy (PSP Essentials), why not let others know?