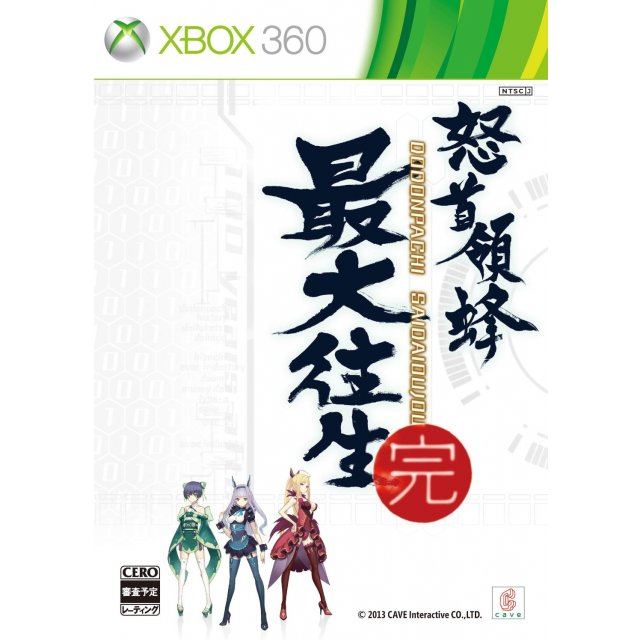 Cave
Rated
By Our Customers
Compatible with Xbox360™ (X360)

sold Out of print / Out of stock.
Manufacturer
Cave
Rated By Our Customers
Compatible With Xbox360™ (X360)
Version

CAVE confirmed the game will be region-free at its release date, so go ahead and pre-order it if you were wondering about this!

If you are familiar with Dodonpachi Saidaioujou [Regular Edition], why not let others know?

vittoriobaky (1) on 15, Mar. 2014 06:31 (HKT)
May just be the ultimate bullet hell experience on X360 (so far)
Ever since I picked up DeathSmiles for X360, I knew. I knew that I had to get the Cave shooters for my X360, because they're just so polished, fun, full of content, tight that there really is much else on consoles for bullet hell fans. There's the occasional great game here and there, but almost no console shooter even came close to the greatness achieved by some Cave classics like the aforementioned DeathSmiles, DoDonPachi Resurrection, Akai Katana, Guwange, and so on.

It is therefore of no surprise that, after buying just about every Cave shooter available in Europe (where I live), I needed to start importing the region free games from Japan. This is where I started, and I honestly believe that I won't find any better than this game: DoDonPachi SaiDaiOuJou.

The gameplay is as tight as you'd expect: extremely precise, good-looking, enjoyable, difficult yet fair bullet patterns that will challenge you fairly no matter what your skills are, thanks to the many, many difficulty settings and options you can apply.

There's an incredible amount of game modes, much more than the previous episode of the saga or other Cave shooters: from all variations of the standard arcade versions, to the Challenges, to a completely revamped Xbox 360 arrangement. All can then be played for competing in the leaderboards, and even in 2 players, both with a real person and with AI.

Whereas many Cave shooters may get tiresome after a bit for people not too hardcore about bullet hell games, due to the fact that after a while it really just becomes a matter of chasing high scores (with some achievements being merely a mirage), that is not the case here. Every completed match earns you coins, which then can be spent towards the unlock of backgrounds, sound packs and cheats - add that to the crazy amount of gamemodes, and there's a lot to come back to from time to time. Even the achievements, between unlocking extra game options and learning some not overly difficult strategies, become much more feasible than in Resurrection.

A special mention should also go to the brilliant double soundtrack: one a mixture of all things EDM, from techno, to speedcore and even dubstep, to another version full of great and speedy electro pop. Along with a great art style, good-looking menus and well-drawn characters, it's a pleasure to "live" the game - even if, like me, don't understand Japanese.

As it stands, this game is rather expensive to import. But if you like bullet hell games, Cave shooters, or you just really think you should start somewhere... this may be it. Perhaps the most complete, most ambitious, most polished and, generally, one of the most fun games, bullet hell or otherwise, on X360 right now. It is therefore worth the money.
adslh8yp (157) on 22, Jan. 2014 08:52 (HKT)
No title
If you're a fan of Dodonpachi then this one is a no brainer, while it isn't the best bullet hell game on the system it is still one of the best.

Buy this before they stop printing copies!
squiregrooktook (2) on 22, Dec. 2013 10:45 (HKT)
Excellent shooter
Same style as always from Cave, though with a few unique twists. The bullet patterns here are uniquely fast and dense, and the game feels like its been kicked into over drive even compared to other Cave Shooters. It's extremely well polished and fun to play, definitely recommended.
Slaz (2) on 16, Nov. 2013 03:18 (HKT)
One of the best STG's available!
This is Cave's most complete release of Dodonpachi. A full voice-acted story mode with remixed music, arcade-HD mode, a novice mode, more different playstyles than any previous DDP installment, and an in-game coin system rewarding continues play with 'shop credits' to buy items that help you progress and learn the game.

This game is obviously aimed at experienced Shmup players, but thanks to the in-game shop and novice mode, it's a good start if you always wanted to experience a 'bullet hell' game!
Gretel Mk Monkey (1) on 07, Aug. 2013 13:28 (HKT)
Maximum Fun
I was very hyped about this game. Very, very hyped. That meant I should have been disappointed, right? Well, this game went againts the laws of hyping and showed how a shoot 'em up games should be done. It's my favourite game ever.

The game has fun and quality sprayed everywhere. The music is excellent and the two soundtracks the game includes fit very well to the game. The visuals are qutie fresh, even though I found the characters a bit funny. The gameplay is very entertaining, and the difficulty settings have been done very well. Players who want challenge will certainly enjoy the game without leaving the less-good players to the side.

If you like bullet hell shooters, this game has been made for you. It's an excellent title, which is a great example of how these kinds of games should be done.