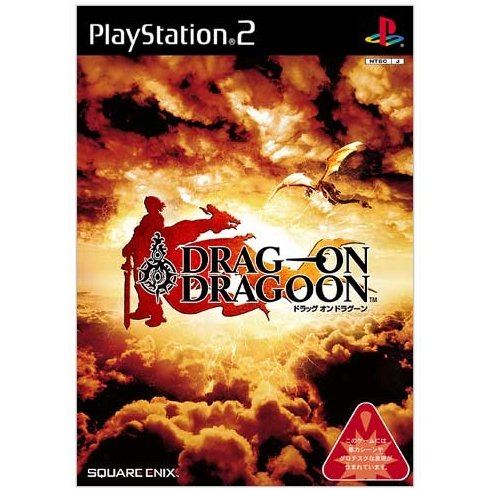 In Drag-On Dragoon you must ride on the dragons to battle with troops of soldiers in the sky. The main character is Kaimu, the price of a small country, his parents were killed during the attacks from the ambitious empire. In order to save his country from the imperial invasion, he allied with the dragon and become the dragon dragoon, the emblem on his tongue is the symbol of the alliance.The second main character is Furiae, the princess and the younger sister of Kaimu, she was chosen by the goddess to become the guardian of the dragons and her country. She uses spells and prayers to protect the country, and she is also the key to world peace.There are both ground battles and air battles in the game. In ground battles Kaimu fights the enemies with swords, shield and arrows. In air battles, Kaimu must ride on the dragon and battle the enemies from both the sky and the ground, the dragon can also cast offensive and defensive magic.巨大なドラゴンを操って鳥のように大空を自由に飛翔し、また地上を埋め尽くす大群の兵士の合戦場に乗り込んで戦局を変えていく3Dフライング＆剣戟アクションRPGです。ファンタジーの世界観で大空を自由に飛び回り戦場へ突撃！そのまま急降下して、敵の騎士やモンスターをバッサバッサと斬りまくる爽快感が抜群！の新機軸アクションRPGです。

If you are familiar with Drag-On Dragoon, why not let others know?

Darius (7) on 17, Oct. 2008 23:05 (HKT)
The best hack and slash ever
This game is the most incredible experience in a hack and slash adventure game. There is no words to describe this, like the language of Kaim.
Thanks to you « Cavia » and please, make a third chapter for this game and an other chapter for Ghost In The Shell Stand Alone Complex.