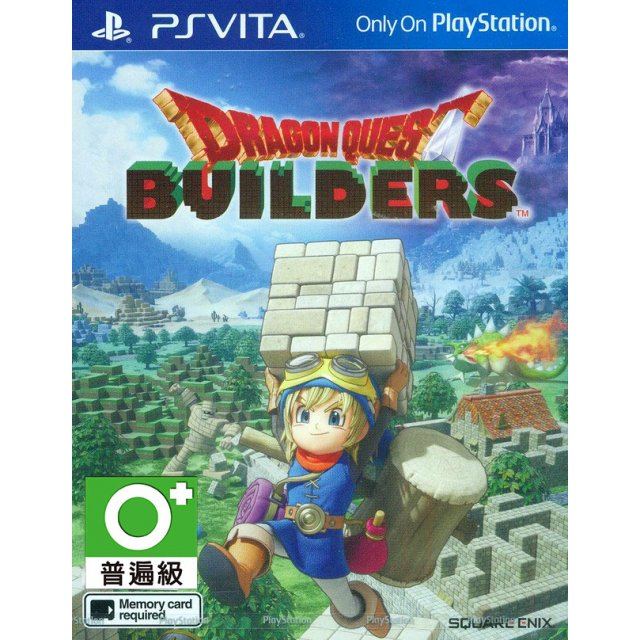 Generations ago, the realm of Alefgard was plunged into darkness when the hero fated to slay the terrible and treacherous Dragonlord, the ruler of all monsters, was instead tricked into joining him. Through this vile villain's magical machinations, mankind was scattered to the winds and robbed of the power to build. With even the idea of creativity relegated to mere legend, the people of Alefgard wander the ruins of their former home, scrounging and scavenging in the dust to survive.

But now, a legendary figure arises - a hero chosen by the Goddess herself - who sets out to return the power of creation to the people of Alefgard. Only when the wonder of imagination has been returned to the land will mankind be able to overthrow the evil Dragonlord once and for all!

If you are familiar with Dragon Quest Builders Alefgard o Fukkatsu Seyo (English), why not let others know?

jandrogo (5) on 16, Mar. 2018 23:05 (HKT)
Must have game
Awesome game. You can spend countless hours building your town and manipulating the environment or/and follow the game history and explore the world
naldo599 (44) on 28, May. 2017 06:52 (HKT)
Awesome Game, great start for Dragon Quest
Thanks to Square Enix for bringing this game for the Vita. This game made me fall in love with the Dragon Quest franchise, and it's a great start for anyone.
adslh8yp (157) on 26, Apr. 2017 23:56 (HKT)
No title
Very fun game for the creative types and Dragon Quest fans!
daniel.horvath.81 (3) on 20, Mar. 2017 08:56 (HKT)
One of the best Vita games, physical and even in German
I have played DQ Builders in Japanese on the Vita first, thinking it would not get localized. When it did get released in the west I played it again on PS4. And now, thanks to the Asian English release the PS Vita version, which is digital only in the west can also be enjoyed on a Vita card. And behold, it not only contains English text, but the wonderful German translation is right there on the card as well! I have not tested, but I would think French, Italian and any European language the game was released in digitally can also be found on the card. It will simply play whichever language your system is set to. This is especially great because the DQ series has one of the most liveable, funny translation traditions in my native language.

So even if English is not your strong point, you can get the game in your native language here!

About the game itself ... it is amazing. It is Minecraft with a purpose. You have quests to fulfill, a story to follow, great art design and one of the best looking and smoothest 3D engines to be found on Sony's handheld. You can navigate the vast landscapes without problems, you can see far ahead, the framerate is good ... this is an alround great achievement on a handheld system.

Do yourself a favor and buy this if you have a Vita. It is sure to be regarded as one of the system's top games forever.
aozgolo (1) on 19, Mar. 2017 08:24 (HKT)
Excellent game, and well worth getting!
I really wanted a physical copy of this game, I thought it was only available digitally but then I found out about the Asia-English version. Well worth importing for physical collectors. This game is so fun, it gets more play than any of my other Vita games.

The game feels like a cross between Minecraft (Mining, Crafting, and Building) and Animal Crossing (Doing favors for people, decorating houses, fishing) with a strong Dragon Quest setting (enemy types, weapons and armor, story, general aesthetic.) It's a pretty long game spread across four chapters each with their own unique lands and characters, each chapter has 4 individual islands to explore. Additionally there's a free play mode called Terra Incognita with it's own landmass and new islands unlocked through story mode. Each chapter can be played as quick or slow as you like. You can build anywhere you want, but you have a set town location to build at in each chapter where your NPCs will interact with the buildings. The environments are all totally destructible and you can reshape it as you wish, your only barrier being the water's edge of each island, but each island is very large and full of places to explore.

The Asia-English version plays fine on any Vita, there are no DLC for the game so region isn't an issue. The game will automatically be in English if your Vita is set to that language.