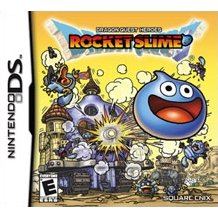 The hero of this brand-new action-adventure is a slime—one of the most popular monsters from the Dragon Quest series.Welcome to the kingdom of Slimenia, a peaceful land where Slimes live in roly-poly harmony. That is, until one day Slimenia is invaded by a mysterious cartel called "the Plob." The plundering Plob kidnap all the slimes in the capital city of Boingburg. Rocket is the only slime left behind and must journey through Slimenia to save his friends and uncover the Plob's nefarious plot!

If you are familiar with Dragon Quest Heroes: Rocket Slime, why not let others know?

For them to make a side-story on the slime monster is just simply fantastic!! Although this game is a little easy, nevertheless I sure enjoyed the hell out of it!!
javitherapper (4) on 27, Sep. 2009 20:37 (HKT)
Good DS game, but easy
Rocket Slime is another title for the Nintendo DS that just shines on the Nintendo platform. The great gameplay, top-notch graphics (for a DS game) and impressive music makes for a great title. The easy difficulty might turn off some players but it really shouldn’t. If you can’t enjoy this game then I should question why are you even playing games? If you want to have fun with just one game for the DS right now, look no farther than Dragon Quest Heroes Rocket Slime.
zeratul518 (1) on 02, Oct. 2006 13:52 (HKT)
Rocket Slime will blast you out of your chair!
The town of Boinsburg is under attack! Giant metal balls are destroying the buildings and every slime except for Rocket has been captured in treasure chests. The Plob has taken over Slimenia and is trying to get rid of slimes all together. How can you save your slimey friends?

As Rocket, you go around Slimenia looking for the treasure chests that contain your slime friends. Then you pick them up and throw the on the TranSlimenian Railway to send them back to town. The main point of this game is to repopulate Boinsburg (the Slime\'s town) with your slime friends as well as collecting as many objects and monsters as you can.

Tank battles can be quite challenging and whereas it\'s rather difficult to actually die, the tank battles actually are hard to win. The difficulty of the puzzles in the game are somewhat easy as well but they do make you think about what you\'re doing.

The soundtrack to the game is very fun. There are tracks that will give you nostalgia to the older Dragon Quest games, but there are new tracks that you love to listen to play for hours. There is one track that is a little weird because of the vocal noises that are played in it, but it fits the situation that it plays in. The music adds to the enjoyment of the game as well as the immersion into the Dragon Quest world.

The storyline is rather simplistic, but it\'s the simplicity that makes the game amazing. Even though the storyline is basically rebuilding the town, there are conflicts and different situations that add more depth than you would think out of such a cute game like this. Overall, this game is very addictive just because you want to collect everything. I actually got stuck playing this game for 4 hours straight before I realized that I had homework to finish. Even then, I didn\'t to put it down. There are great little references in the game to pop culture and other video games. One of the tanks that is a tree is named \"Chrono Twigger.\" The small little Easter Eggs like this just make you smile. This game is filled with comedy and it\'s overall a very enjoyable game. This is a treasure that might be buried in the DS line-up and it\'s much better a game than it comes off as. It lives up to the hype it had and the high reviews don\'t lie. This game will make you addicted to it where you\'ll want to play it every chance you get. I never played my DS on the train before until I got this game. I just couldn\'t go that long without playing it!
rika95 on 28, Sep. 2006 10:22 (HKT)
Simply Funny
Rocket Slime is ball of laughter and fun. It is full of puns and goofiness. Throughout the game is silly dialog amongst members of the Plob who act like well intentioned idiots. The music during these encounters shifts to emphasize the goofiness of the Plob gang trying to act cool. At various points in the game, you battle in tanks. The titles and subtitles of the tanks are puns and comedic references that pertain to American culture and Square Enix games. Even the sound effects of the main character, Rocket, amuse the ears. I love the “boing” sound that Rocket makes when bouncing around. The colorful cartoon style of the graphics completes the package of emphasizing the light-heartedness of Rocket Slime.

This game is a spin-off title of the Dragon Quest series, which are normally RPGs. However, Rocket Slime differs from the series because it is an action adventure title. Unlike most Dragon Quest games, Rocket Slime can be conquered within far less than 100 hours. It took me 28 hours to beat the game, and most people complete it within 20 hours. The straightforwardness of Rocket Slime hinders replay value. Another drawback is that starting a new game requires erasing the old game file, first. Folks wanting to start over, but keep all past progress saved, are out of luck.

I like the challenge presented in Rocket Slime. It is neither too hard nor too easy. Enemy movements during the adventure portions of the game are predictable enough to dodge their attacks. After clearing considerable portions of a level, you can jump into warp holes to open short cuts to earlier parts of the stage. This makes it easy to save the game & quickly return to the same point at a later time. At various locations, Rocket finds fruit that increase his max life. Just like in Zelda, hearts represent life. Unlike Zelda, Rocket doesn’t use a bunch of tools during his adventure. Rocket uses his body as a weapon. Also, most enemies don’t hurt him unless their attacks hit him. In general, it takes three physical attacks to kill an enemy, but an even quicker way to take care of a baddy is to drop it onto the train to Slimenia. He does that by first ramming into an enemy. This bounces it into the air. If Rocket catches it, he then carries it on his head. Rocket can carry up three monsters/items on his head at one time. He can throw the bottom item/monster at any time, and he can rearrange their order with a shoulder button. Some items give Rocket special abilities when he carries them on his head. For example, a SlimeKnight allows him to fight with its sword, and cloak makes him invisible to enemies. When Rocket throws an item/monster at an enemy, it inflicts damage. However, tossed enemies resume attacking Rocket once he no longer carries them on his head.

The challenge in Rocket Slime is greatest during tank battles, which require careful planning ahead of time. You pick all the ammo to use in your tank, and you decide which three characters would accompany you for tank battles. You acquire ammo during the adventure portion of the game by sending various items home via the train to Slimenia. Better ammo can be created through the use of alchemy. The characters that join you during tank battles help by loading ammo into cannons, launching themselves at the enemy tank, sneaking into the enemy tank & sabotaging its weapons system, healing your party, etc. Each character can do one or two of these things, hence the importance of careful planning ahead of time.

At some point, you can participate in tournament in which you fight other tanks, but you get to pick any tank to use during battles. You could also compete against friends in tank battles. However, folks like me that don’t have friends close by are out of luck, because there is no wi-fi for multiplayer battles. Other bonuses in Rocket Slime including a surfing mini-game and paintings you can draw on. In the surfing mini-game, the goal is to collect as many coins as possible within a limited time frame. When drawing over paintings, you use the touching screen to draw directly onto it. (That is probably the only time the touch screen is used.)