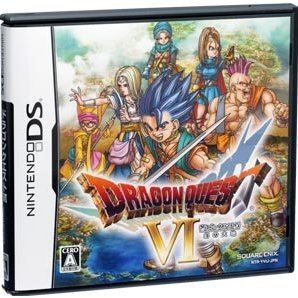 sold Out of print / Out of stock.
Manufacturer
Square Enix
Rated By Our Customers
Compatible With Nintendo DS™ (NDS™)
Version


Click on a thumbnail to see more pictures for Dragon Quest VI: Maboroshi no Daichi

Become the hero of your own adventures. The third game in the Dragon Quest Heaven series is remade for the Nintendo DS with graphical updates and other system upgrades. More information on the game will be available once Square Enix post more up.You live a peaceful life in a small rural village with your little sister. However, one day the fairies in the forest showed up and entrust you with a mission. One mission leads to numerous challenges, and before you know it, you have set off on the path to save the world.

If you are familiar with Dragon Quest VI: Maboroshi no Daichi, why not let others know?

fuyuka (54) on 15, Aug. 2011 19:40 (HKT)
Last in the Heavenly Series
Great storyline and last in the Heavenly Series Trilogy brought to the DS. A must have for any DQ fan.
Yushuan Shieh (16) on 24, Aug. 2010 15:16 (HKT)
A long waited remake!
When Dragon Quest VI came out on the Superfamicom, it became an instant hit and has remained a classic RPG since. Different from DQ4 and DQ5, it re-introduced the Character Class system from DQ3, and features an adventure that requires you to travel between two worlds, which are twice as big as the world of DQ4 or DQ5, when combined.
marie_commande (1) on 21, May. 2010 16:17 (HKT)
English
Is it in Japanese or can you put it in English?
thomas.cheng.qa (25) on 10, Apr. 2010 09:07 (HKT)
First remake of the game
This is the first time that the game has been remade on any system. The game was really good graphically back at the SFC days already because it was one of the last games on the system. Transitioning to the DS seems to have done well. Some people may not regard this as the best game in the series, but fans of the series will continue to love it and this game is no different. The job system in this game is closed to perfection and if you are one who digs grinding for level up and all that, then this game is for you. A game not to be missed despite its less-than-popular story.
soulhouf_f (1) on 22, Mar. 2010 05:41 (HKT)
A master piece
Great remake for the Super Famicom DQVI. The graphics have been reworked like those of DQIV and V on DS.
All J-RPG fans must buy this game. It is awesome.
1 »