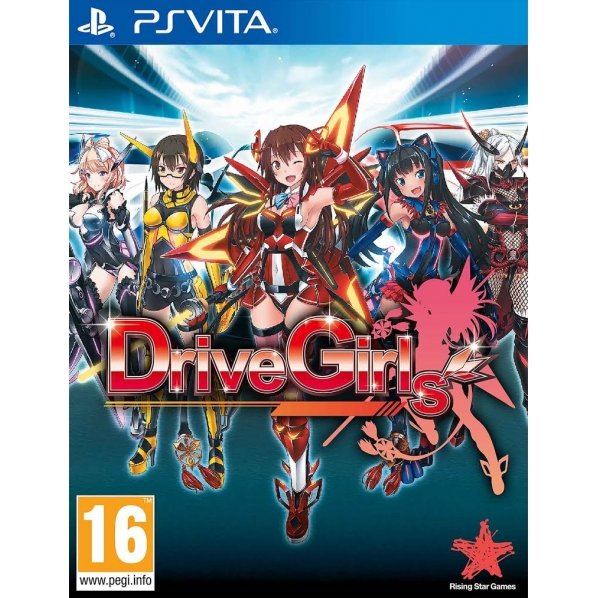 sold Out of print / Out of stock.
Manufacturer
Rising Star Games
Rated By Our Customers
Compatible With PlayStation Vita (PS Vita)
Version


Click on a thumbnail to see more pictures for Drive Girls

In a world where humans can transform into automobiles, the Drive Girls are ready to hit the road and save the day! Play as five different Drive Girls and transform from superheroine to supercar and back again, as you smash through wave after wave of mechanised bug enemies attacking your home of sun island.

If you are familiar with Drive Girls, why not let others know?

Dom (13) on 29, Apr. 2019 10:11 (HKT)
Transforming cuties on wheels
Waifus and racing, with beat me up elements...really nicely done!
nate623 (2) on 09, Sep. 2017 10:48 (HKT)
Lots of fun, sometimes repetitive. But a sequel could be really good.
The game is about 4 girls and their boss, that work for a secret organization that fights alien bugs. The 5 females are able to transform into different types of cars used to race, and help fight off the enemy bugs.

The fighting is somewhat simplistic, much like a Senran Kagura, or Dynasty Warriors style action game. The actual driving mechanics actually work better than I expected them to.

The graphics are sort of standard for an action game on the Vita. Nothing great but not bad.'

Lots of missions to play through, some are races vs other characters, some are battles against the giant alien bugs. These missions don't vary much. It ends up being alot of the same thing. But atleast the gameplay is somewhat fun.

You earn rewards during battle, to level up your character. There isn't much customization what so ever. There are "stickers" that give you stat boost, but they aren't very pretty to luck at, and they just don't fit the graphic style.

As it is, it's a fun game with a cute silly story, made by a smaller studio. It's a game you play until you are tired of the missions, then come back to it a few weeks later and spend some time with it again. With more customization, and more creative mission types it could, it could be a lot of fun

*I cannot comment on the online game mode, because I have yet to see anyone at all. Even after I created room and waited for an hour for a teammate. But it seems like the same game, with a human partner rather than the CPU controlled.
lifeofbrian2005 (80) on 22, Aug. 2017 05:28 (HKT)
A fun Brawler RPG MUSO style game
The game is a fun action game in the vien of a MUSO game, but mission based so not open world, with girls that turn into cars. Its wacky and funny sense of humor.

Cars control like CARS but also have special moves and all sorts of leveling up and things to collect. Watch some video of it its really hard to describe but I would say its a game most vita owners should have. Its fun strangeness adds some fresh color to the genre.

Learning when its best to be a car vs being a girl is part of the challenge.
DanChan (12) on 08, Aug. 2017 15:23 (HKT)
Not the best, but good enough
The game itself is fun to play and have enough features and mechanics to hook audiences. It's a budget Shenran Kagura with fewer possibilities but still fun to play. The stickers and the sets for improving stats are also fun to dig in.