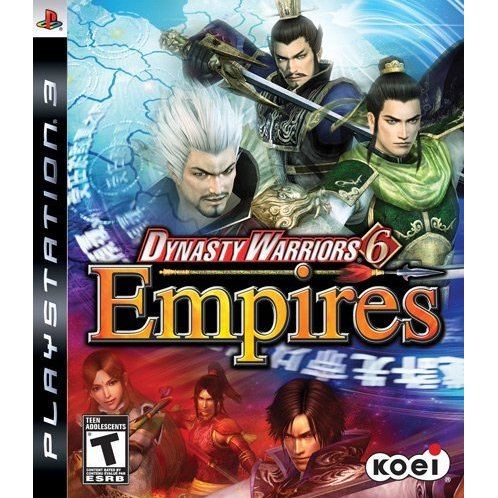 
Click on a thumbnail to see more pictures for Dynasty Warriors 6: Empires

Based on the epic novel, Romance of the Three Kingdoms, the genre-defining Dynasty Warriors series depicts the massive battles ignited by the fall of the Han Dynasty when three rebellious states moved to overthrow the Emperor of China. Featuring a new proprietary combat engine for next-gen consoles, Dynasty Warriors 6 delivers the exhilaration of single-handedly destroying thousands of soldiers on massive fields of combat. The lighting-fast kung-fu fighting, fluid motion-captured animation, intuitive combat system and immersive environments create an unparalleled gaming experience, and push the limits of Tactical Action.

If you are familiar with Dynasty Warriors 6: Empires, why not let others know?

cnepos1 (60) on 13, Feb. 2013 03:48 (HKT)
Addictive.
A fun game overall. There's a lot to unlock in this game via various challenges in the game, which means there's a lot of replay value. The graphics are nice and the Renbu system has been altered somewhat from Dynasty Warriors 6 which just makes this game even better. The only real downside to this game is that there's very little strategy involved.
If you're a fan of the series this game won't disappoint.
leandrorizzato (216) on 04, Sep. 2012 05:53 (HKT)
Good Game!
More one good game of Dynasty Warriors series. Gameplay and the graphics are cool, the Character Creation is a good inovation to the series. So, I recommend it to lots of hours of battles!!!
H.s (14) on 15, Sep. 2010 13:19 (HKT)
Fun!
Empires is a nice to play game. Graphics still acceptable the audio is quite impressive. choosing a ruler to serve and completing missions might be a gd way to start. Aft tat simply step dwn frm ur position and take the ruler place and rule.
ckskevin (7) on 14, Jul. 2010 20:32 (HKT)
Decent but not that great
Decent game where you get to be the king for once but don't compare this with the Romance of the three Kingdoms series. The strategy part is little. Once you managed to get your weapon up to max, few people can stop you.
Story, 2/5 - No story in this game although certain special events makes up for its loss.
Gameplay, 3/5 - Nothing new here. Same old Same old. Enemies are pretty stupid and sometimes wait for you to strike before striking back at you.
Graphics, 3/5 - Well, its not special. Every soldier look the same. Sometimes I feel like I am playing Star Wars Clone Wars.
maxlimit (13) on 23, Nov. 2009 11:45 (HKT)
Better than before, but still more of the same
Pros: Lots of options for character customization, differing starting conditions for various eras. Ability to choose to serve under different states (rather than the normal trio of Shu, Wei and Wu) is also a plus. Added variety of missions also helps to lessen the monotony.

Cons: Ally AI is horrible as usual, no unique movesets for generals. Distribution of generals is also wonky at times from the start.( i.e historically inaccurate). No real option to form an empire other than invasion (would have been good to add some options for diplomacy etc.)

Only for fans of hack-and-slash games.
1 »