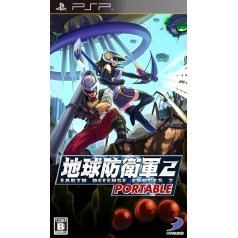 Works on all systems sold worldwide, a correct regional account may be required for online features.
1w Expected stock arrival within 1 week.
US$52.99
Manufacturer
D3 Publisher
Rated By Our Customers
Compatible With Sony PSP™ (PSP™)
Version

Earth Defense Force 2 takes place 3 months after the Invaders war, the mutations started in England, upon receiving the SOS call from London, the hero flew in to investigate. Instead of the elegant city, all he sees are ruins and large insects rampaging what remains of the buildings.

Join the EDF force, pick up your firearms and battle the monsters and aliens that infest the planet. Earth Defense Force the 3D shooter has been a hit the moment it appears. The Sony PSP game incorporates new elements, gameplay options and an adhoc network mode which allows 4 gamers to play together.

If you are familiar with Earth Defense Force 2 Portable, why not let others know?

[This review is based on another version of this product]
stuckintheinbetween (34) on 03, Mar. 2013 03:26 (HKT)
Great Game Never Released in America
This game was originally on PS2, but it was never released on PS2 in my country and wasn't region-free. However, this great PSP version is totally region-free and a whole lot of fun. Not to mention, the price is also very affordable. :)
[This review is based on another version of this product]
strife2188 (149) on 26, Jan. 2013 00:35 (HKT)
good game
it is a very simplistic but fun game. it is fun to play when you have nothing to do
adensyra (1) on 09, Jun. 2011 10:14 (HKT)
No title
Earth Defense Force 2 Portable is a great port of what I consider the best game in the EDF series. It has all the content from the PS2 game, and more, with great additions like new enemies, weapons, and multiplayer options. The controls aren't as accurate, but Control Type A mimics the dual analog control well, and it's easily playable. This is just a fantastic portable game for any fans of EDF, or classic science fiction, and it's easily importable even for non-Japanese speakers, with only a little translation needed, though you'll want to become familiar with how the weapon selection screen is divided.
Tchernobyl 94 (1) on 20, May. 2011 01:37 (HKT)
Very good game. If you like EDF 2017, you will like it. In addition, there are some amazing monsters, like the giant centipede or even a kind of Godzilla.
stanthony360 (3) on 10, Apr. 2011 02:01 (HKT)
Edf
best edf game ever better then 2017 or in japan edf 3