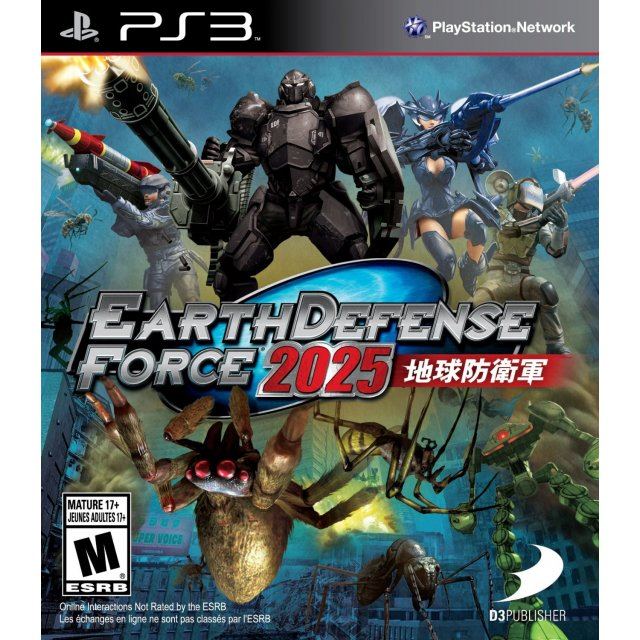 Defending the Earth continues in the long awaited return of Earth Defense Force series. EDF soldiers returns in Earth Defense 2025, as the alien insect invaders come back from dormancy to disturb the peace once again. A new epic battle against Ravagers that will surely hold courage and pride in mankind.Earth Defense Force 2025 is an over-the-top action shooting game that arms players as an EDF soldier heavily equipped with hundreds of powerful weapons including assault rifles, sniper rifles, rocket launchers, energy weapons and grenade launchers to drive away insect infestation from all enemy fronts. Earth Defense 2025 introduces four new soldier classes such as Rangers, Fencers, Air Raiders and Wing Divers who are ready to battle out with Ravagers in order to save humanity.With tons of missions in EDF, Earth Defense 2025 is filled with incredible action in five different difficulty modes. There is also online multiplayer supporting up to four players, allowing players to team up with friends to create an unimaginable EDF squad and fight side by side against Ravagers. The Earth Defense Force is mankind's last line of defense. Gear up, attack the Ravagers and save the people!

If you are familiar with Earth Defense Force 2025, why not let others know?

forteii (67) on 31, Aug. 2015 22:18 (HKT)
Best co-op shooter
Easy to pick up, hard to master. I hardly ever have this much fun blowing up giant monsters - BRUTAL D00M aside, that is.
The framerate drops is a speck in comparison to the huge amount of content (weapons, vehicles and anything in between) which translates into sheer replay value. Harder difficulties unlock insane weapons too!
dkf82 (53) on 14, Aug. 2015 08:34 (HKT)
the fun factor is all that matters
EDF 2025 is an excellent 3rd person shooter, its totally addictive because ull be fighting against waves and waves of giant bugs.

also its really fun to unlock all the weapons in the game, which is really rewarding after clearing the whole stage.

its really cool to have a huge variety of weapons, this is one of the main reasons that push me to keep playing and playing the game for hours.

there is also a local multiplayer mode with split screen so you can play together with a friend side by side.

this game have a lot of content and lots of stuff to unlock, a gem within the PS3 game library.


topfinal (133) on 22, Apr. 2015 12:43 (HKT)
great edf game
4 player co-op
nice storyline
easy to get trophies
[This review is based on another version of this product]
manjiuay (36) on 06, Sep. 2013 14:27 (HKT)
good game
pretty good for EDF fans to continue the collection. easy control, shoot them up style. nice addition to have online play
[This review is based on another version of this product]
GG (1) on 07, Aug. 2013 22:37 (HKT)
Best EDF game yet!
This is the prettiest, most detailed version of the game yet.
It helps to at least be able to read katakana, but with a bit of trial and error and knowing how things worked in EDF 2017 or GDF, you should feel right at home.
The basic atmopshere shouldn't lock you out even if you just catch up on the occasional english word and that's all that's matters.
1 »