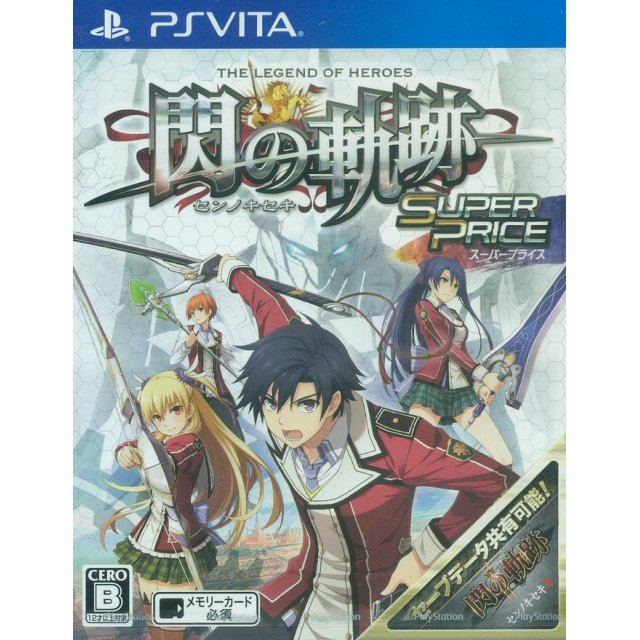 sold Out of print / Out of stock.
Manufacturer
Falcom
Compatible With PlayStation Vita (PS Vita)
Version


Click on a thumbnail to see more pictures for Eiyuu Densetsu: Sen no Kiseki [Super Price]

Legend of the Heroes: Sen no Kiseki (Eiyuu densetsu: Sen no Kiseki) is another anticipated chapter in one of the most celebrated and well-established RPG series in the history of video gaming.

Connected to the previous “Trails in the Sky trilogy”, Sen No Kiseki features a unique strategic battle system known as the "Tactic Link System." Combat will speed up through an intuitive, command-based battle system with an emphasis on character bonds; the stronger the bond, the higher the chance for a critical destruction.

The game also boasts the "Active Voice," in which the cast will voice dialogue in more scenes including movement, in-town scenes, and conversations and the "360-Degree Free Camera," in which players can freely control the camera across the map in 360 degrees.

A highly acclaimed soundtrack from the renowned Falcom Sound Team JDK will definitely set the mood for this moving tale that spans over 50 hours of thrilling gameplay.

If you are familiar with Eiyuu Densetsu: Sen no Kiseki [Super Price], why not let others know?

risizanagi (3) on 26, Feb. 2015 02:55 (HKT)
An excellent story-heavy jrpg
Got my copy yesterday and just started playing it but wow. So far I'm seriously loving the game. For starters, I'll mention the flaws that I've noticed. The models looked nice but it can look better and also the character movements could be improved. But then again, this is Falcom's first Eiyuu Densetsu game in full 3D so it's to be expected. They still have a lot of room for improvements. Now the bright sides are, first off, the story. It's really nice with some enjoyable moments and the interaction between characters is really enjoyable to watch and read. The game is very text heavy so without proper japanese reading ability, you might find yourself in a lil bit of a trouble. But if you can read japanese, it's really fun, with some hilarious moments. Secondly, the bgms. Not much is needed to say about this since if you're familiar with Falcom games, u'll know that it will have superb arranges, which is a really huge plus. All in all, it is a really great rpg that I can easily find myself spending over 100 hours on this game.