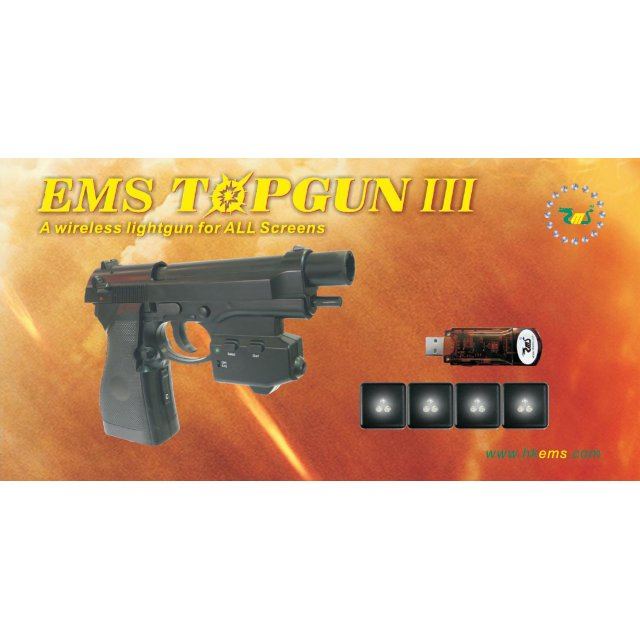 When they work, they work beautifully...
But the operative word there is 'when'. I'm gonna try and keep this concise to help people decide on the product. I bought 2 of them for what it's worth as well.

The pros:
They DO work. And when they do work, they work really well. Virtua Cop as an example, once everything is calibrated right, You can point ...[read more...]

If you are familiar with EMS TopGun III, why not let others know?

I tested it with Time Crysis the next day.
good work~
After that vampire night and ninja assult is
good work!

I took two hours without rest.
fun!
Jae (1) on 26, Dec. 2018 13:34 (HKT)
Absolutely Superb for PlayStation 2
Got this for use with a 'big box' UK PAL PS2 and it is brilliant! Highly recommended. Here's some things I found while setting up & testing: (1) This doesn't work with Matrix chipped PS2. (2) Read the whole manual before starting. (3) When calibrating, first adjust the 'Pointer Tuner' X and Y screws so that the red dot lines up with where you're aiming when using the sights. After that, you should be able to calibrate as described in the manual without issues. (4) This works with Virtua Cop Elite Edition, Crisis Zone, Time Crisis II (presume III as well, but untested), Vampire Night and GunCom 2. It does not work with Endgame. (5) Turning off the recoil seems to be a good idea. It's quite violent and can affect the gun's performance. (This came up on several sites I browsed for info.)
a_tisekar (1) on 27, Mar. 2018 08:35 (HKT)
My EMS Top Gun 3 Review
Well this gun ticks a lot of boxes i wanted to play some classic PS2 light gun games on my PS2 or PS3 (backwards compatible model)
Item came well packaged and my initial thoughts are that it looks a lot like a real hand gun then a toy light gun which may or may not be a good thing to some people. Personally i like it and the recoil and laser sight are grear too. It has an auto fire slider switch too.
Setting up is prertty easy it takes 4x AA batteries
a USB power supply which connects to the 4 sensors that you stick to your TV. It comes with clay for this.
It also has a usb dongle which is used to communicate with the gun.

Now this is the tricky and most frustrating part - The Calibration is very tricky I dont know if i am doing something wrong but i followed the instructions and just couldnt get it right. I tried it for 2 hours then gave up. Went back to it another day and this time i got it working and 100% perfectly calibrated. I played some time crisis 3 and it was a great experience i loved it. So in all I give it 3 stars because it can be abit difficult to get it setup and it has to be configured everytime you want to use it. When its setup well its the next best thing to using a traditional light gun on an old crt tv. Also other criticism is the recoil still triggers when you are out of bullets unlike the arcade and not sure but i cant figure out if there is a way to turn off the laser sight as it makes the game easier with it on
taylor.jaye7 (1) on 05, Dec. 2017 13:45 (HKT)
When they work, they work beautifully...
But the operative word there is 'when'. I'm gonna try and keep this concise to help people decide on the product. I bought 2 of them for what it's worth as well.

The pros:
They DO work. And when they do work, they work really well. Virtua Cop as an example, once everything is calibrated right, You can point the guns up to the screen, close one eye, and have perfect 1:1 of where the gun points to where the bullet impact shows on the screen. That was better than I expected.

Having two of them, there seems to be no conflict with each other. Set one to Channel 1, the other to Channel 2, and even sitting directly next to each other in the PC, with other wireless devices around, no dramas on that front.

They're REALLY kind to batteries. I've had the same set of cheap alkalines in my guns for over a week now, with quite frequent use everyday, and they still show no signs of dying out.

The unsigned drivers are atrocious. And it's not just that you have to put your PC into test mode, they're just crappy barebones drivers. There's an entire D-Pad on the guns that is literally unuseable because "a mouse only had 5 buttons so what can we do", and that might be a good enough reason for some, but get this, I'm holding a mouse RIGHT NOW with over 15 buttons on it, all programmable and workable to do whatever the hell I want. Don't say something isn't possible because you couldn't be bother to implement it. :p These virtually useless D-pads really irritate me. Supposedly you can map the D-Pad for example to Mouse1, Mouse2, Mouse3, Mouse4 that way.... yeah.... sounds completely useless to me as well.

If you're on windows 10, and want to use two of these, you're gonna have a bad time. Something has changed about the way Windows 10 handles device migration, so once you leave test mode, then go back in to reapply your drivers, and the device migration does funny windows 10 things, demulshooter will stop working. I had to downgrade to Win7 for this.

And finally, probably the worst thing about them, and I think it probably hearkens back to the awful drivers - They're literally "buggy". Every half an hour so, your mouse goes to the top of the screen and spams left clicks even when you haven't touched the guns, and the only way to get your mouse function back is to turn the gun on and off, sometimes twice, sometimes both of them.

For all of these reasons, I'm gonna have to give them 4-stars. If you're reading this "review" then you're already a lightgun enthusiast, and in this regard you will love these guns.

But the cons are very real, and afaik there's no way around them (I'm trying to write an autohotkey script atm that will maybe make the D-Pads useful, but I'm not having much luck so far).

If you REALLY want wireless, and you don't mind working around the hiccups of the drivers like I have to, by all means by this. The wired "alternative option" will probably cause less headaches in the long-run though.
j2k1 (1) on 14, Nov. 2017 13:30 (HKT)
Good gun
Fast delivery. But the gun needs a very accurate calibration.
1 »