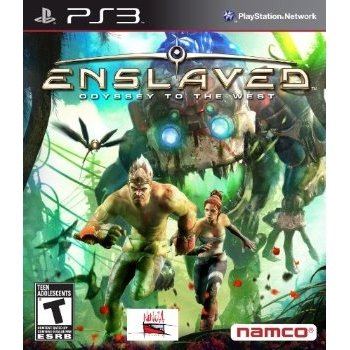 Works on all systems sold worldwide, a correct regional account may be required for online features.
24h In stock, usually ships within 24hrs. (Only 1 left in stock.)
US$21.89
Limited time offer - Secure yours now before the offer expires!

Works on all systems sold worldwide, a correct regional account may be required for online features.
24h In stock, usually ships within 24hrs
(Only 1 left in stock.)
Price
US$21.89
Our previous price:
US$ 24.99
You save:
US$ 3.10( 12% )
Play-Asia.com Return & Refund Policy
Trustpilot
Trustpilot
Click on a thumbnail to see more pictures for Enslaved: Odyssey to the West

Enslaved is a post-apocalyptic retelling of the classic 400-year old novel ‘Journey to the West’. Set 150 years from now, the world has been ruined by war and ecological disaster with only a handful of survivors remaining. In Enslaved, players take on the role of Monkey, a strong and athletic, yet solitary figure, who been captured by one of the mysterious slave ships, which harvest the remaining population and take them out west never to return. Trip, a technologically savvy young woman who has also been imprisoned by the same ship, manages to escape. She quickly realizes that Monkey, with his raw strength and power, is her only hope to survive the perilous journey back to her home. She hacks into a slave headband and fits it on Monkey, linking them together – if she dies, he dies… Her journey has now become his and Monkey must now travel west alongside Trip as they traverse a demolished world, under constant threat of capture and mortal peril.

(Please note that any DLC included in the game may be expired. This will not affect the overall experience of the game itself.)

If you are familiar with Enslaved: Odyssey to the West, why not let others know?

julius2 (26) on 17, Oct. 2014 22:31 (HKT)
Viciante
Não comece para não ter que ficar sem parar de jogar.
conor (8) on 11, Feb. 2014 04:34 (HKT)
Great game
i really enjoyed this game. i bought it on a different sight and was so angry when i saw that play-asia had it for a much cheaper price. the gameplay was really fun, with really obscure mechanics and teamwork type controls, which i actually really enjoyed. the concept of the game was what really won me over, and i'd like to see more of these kinds of games in future.
soulfire.rn (84) on 23, Oct. 2013 23:18 (HKT)
Wonderful!!!
Great game, great story, great characters. Highly recommended.
conrado.lusa (6) on 23, Aug. 2013 07:15 (HKT)
Recomendo!
Sou cliente brasileiro deste site há algum tempo, nunca tive problemas nas compras. Falando do jogo, é um jogaço! Não tão conhecido, mas muito bom. Realmente recomendo!
Derp (12) on 10, Jul. 2013 19:56 (HKT)
Flawed but still very nice
Set amongst post-apocalyptic, near-future modern ruins, the environments in "Enslaved" (much like "Fragile Dreams" for the Wii) is both haunting yet beautiful. Unfortunately, what would otherwise be an underrated classic, this game also have some significant flaws, such as occasionally sticky controls and inconsistent frame rates in some areas.

... Still, if you've gotten bored of the typical AAA titles and can overlook these flaws, the experience this game provides can be quite rewarding.
1 »