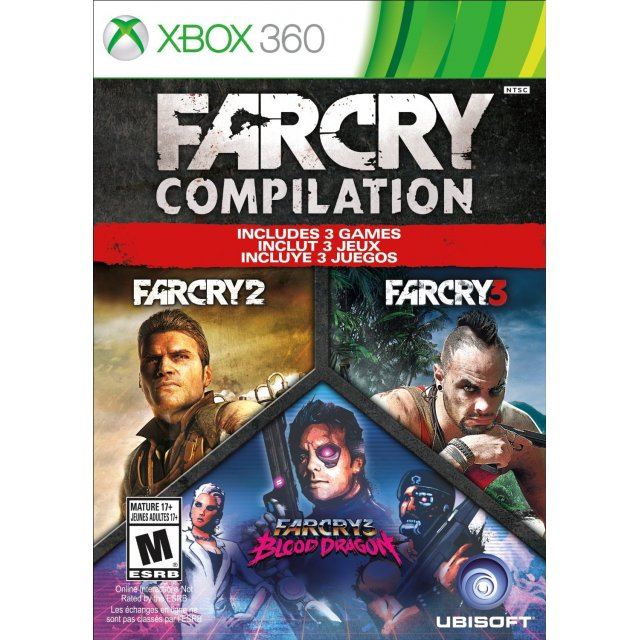 Simply One of a Kind Games:

To celebrate the 10 years of the critically acclaim first-person shooter video game franchiseFar Cry, Ubisoft announces the biggest treat they could give, theFar Cry Compilation! Experience again the cunning yet thrilling chills of Far Cry 2, Far Cry 3 and Far Cry 3: Blood Dragon on the Xbox 360. The games feature a visually impressive and ambitious unique setting, brilliant AI and a palpable atmosphere that make the three games inFar Cryfranchise a quintessential gaming experience! Each game offers a one of a kind storyline and gameplay that will keep gamers busy for a long time!

The Return of the Three Phenomenal Games:

Far Cry 2brings new meaning to the term open world. The players will be caught up in the middle of a corrupt war while a spreading malaria outbreak festers in the background; obviously the setting will get in the way of accomplishing the main goal of the game, to take down “The Jackal”, the man behind the conflict of the two rival factions that endanger thousands of lives in Africa.

Far Cry 3offers an island of fun and craziness! Play the role of Jason Brody, a man stranded in a mysterious tropical island that runs lawlessness and violence to its people. Enjoy conquering bases and towers in a vicious but enjoyable way. Prepare to slash, sneak, detonate and shoot your way to survive this dystopia.

Far Cry 3: Blood Dragonfeatures an exceptionally fun game that flawlessly captures the neon boldness of action flicks from the 1980s. The game offers a single open-world island to explore and the return of Far Cry 3’s gameplay and mechanics, but with a great emphasis on paying homage to it's radical inspiration.

If you are familiar with Far Cry Compilation, why not let others know?