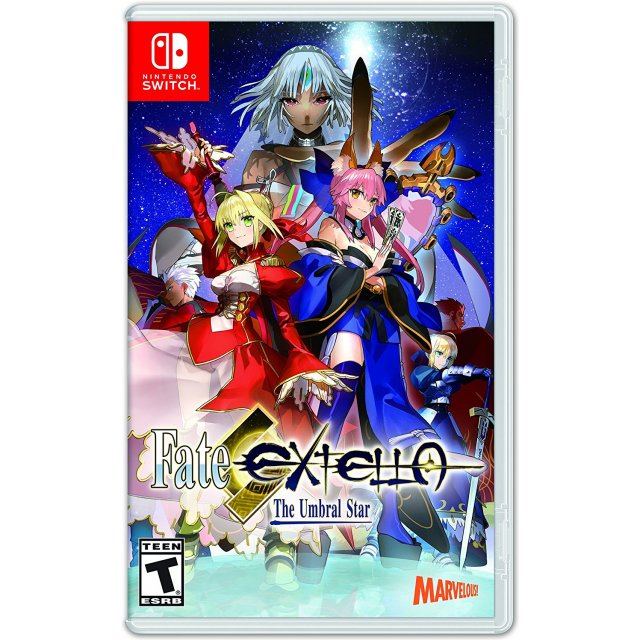 Works on all systems sold worldwide, a correct regional account may be required for online features.
1w Expected stock arrival within 1 week.
US$55.99
Our previous price:US$ 59.99
You save: US$ 4.00( 7% )
Manufacturer
Xseed Games
1w Expected stock arrival within 1 week
Price
US$55.99
Our previous price:
US$ 59.99
You save:
US$ 4.00( 7% )
Play-Asia.com Return & Refund Policy
Trustpilot
Trustpilot

Click on a thumbnail to see more pictures for Fate/Extella: The Umbral Star

The famous Fate series now strikes a path to a new stage with the newest title, Fate/EXTELLA: The Umbral Star.

Many fan-favorite characters, including the ancient Heroic Spirits (Servants) summoned by the Holy Grail, make their appearances, with the series being reborn as a high-speed combat-oriented title in which players face off against the enemy and their army in exciting large-scale action scenes. Players can also take some time to enjoy the deep storyline the Fate series is known for.

MXGP3: The Official Motocross Videogame
US$ 40.99

If you are familiar with Fate/Extella: The Umbral Star, why not let others know?

mome9408 (8) on 29, Mar. 2018 12:08 (HKT)
A great addition to the Fate series
This game is a good addition to the Fate series and the Nintendo Switch. The lore and story are quite interesting and the characters have all their own stories too so you can see more points of view than just the main heroines'. It being a musou game adds to the fun of it all, although the camera doesn't respond as quickly ad the gameplay should. Other than that if you are a fan of the Fate series (and Fate/EXTRA more so) then try this game out.