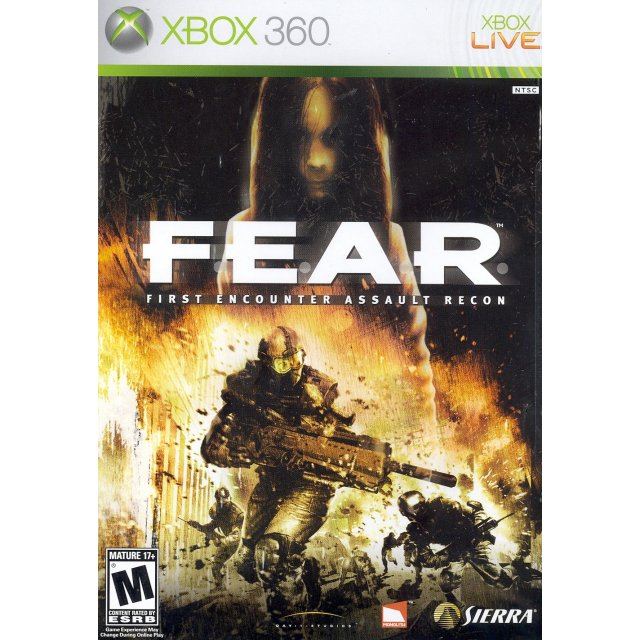 sold Out of print / Out of stock.
Manufacturer
Vivendi Universal Games
Rated By Our Customers
Compatible With Xbox360™ (X360)
Version

F.E.A.R.™ (First Encounter Assault Recon) is an award-winning first-person shooter featuring an intense combat experience with a rich atmosphere and an engaging story. F.E.A.R. immerses you in a unique blend of stylized first person combat and supernatural horror in which you are an elite soldier trained to deal with situations that are unexplainable.Take on the role of the point man in the F.E.A.R. unit. Armed with hyper-sensitive reflexes, you can slow down time and experience the game's close-quarter battle sequences in vivid detail. You'll need every advantage you can get as you square off against some of the most ferocious A.I. ever seen in a game. F.E.A.R. contains both a single player campaign and multiplayer modes that are available for play through Xbox Live® or System Link play.

If you are familiar with F.E.A.R. First Encounter Assault Recon, why not let others know?

[This review is based on another version of this product]
kingscorpion_2000 (84) on 03, Apr. 2013 20:14 (HKT)
One of the best games!
This game is one of my favourite. It's a first person supernatural shooter. You will find yourself on your toes all the time while playing this game. For the intensity and atmosphere, I give it a perfect score. Highly recommended game!
[This review is based on another version of this product]
gzq07167 (13) on 15, Mar. 2010 08:04 (HKT)
this is the
this is so scarely, but exciting game.
Anonymous on 15, Feb. 2007 21:02 (HKT)
5 stars is for play-asia amazing service
Arrived after 6 working days to my home in Portugal (EU), outstanding!
No problems reading in my PAL x360. I just played for 5 minutes and I liked the smooth framerate but the graphics are not a x360 reference.
Keeping the excelente work play-asia!
newinjapan2002 (143) on 28, Jan. 2007 14:33 (HKT)
Excellent Game
Great FPS game and even if you have played through the PC version you can still enjoy the 360 version because it features extras not included in the PC release!
Nice smooth combat system, story is pretty bare bone and simple but the action and spooks in this game are what you are buying it for. That and it is a lot of fun!
Thompo on 23, Jan. 2007 18:48 (HKT)
A Scary Action FPS for your 360
This is my second purchase from Play-Asia and it is a great service. It works fine on my PAL console and arrived within 5 days.

A good game mixing first person shooter action with scary gameplay and at this price is a bargain.

If you are a fan of FPS then you should get this game, the graphics are not 360 standard but still good. i will give it 4 stars as it can be repetative though online play is fun.

5 stars to play asia though for great service again, cheers
1 »