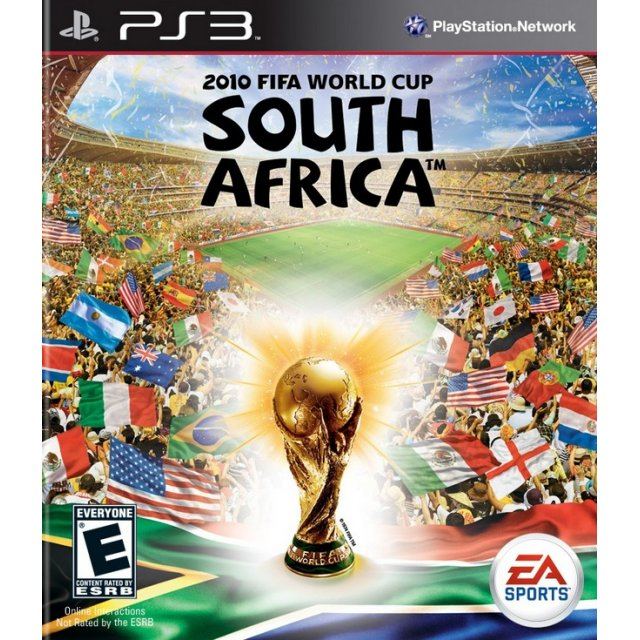 Works on all systems sold worldwide, a correct regional account may be required for online features.
1w Expected stock arrival within 1 week.
US$13.39
Our previous price:US$ 62.40
You save: US$ 49.01( 79% )
Manufacturer
Electronic Arts
Rated By Our Customers
Compatible With PlayStation 3™ (PS3™)
Version

Works on all systems sold worldwide, a correct regional account may be required for online features.
1w Expected stock arrival within 1 week
Price
US$13.39
Our previous price:
US$ 62.40
You save:
US$ 49.01( 79% )
Play-Asia.com Return & Refund Policy
Trustpilot
Trustpilot
Click on a thumbnail to see more pictures for FIFA World Cup 2010

EA SPORTS™ celebrates the single largest sporting event on the planet with the only official and exclusively licensed videogame for the 2010 FIFA World Cup South Africa™.Experience all the emotion and passion of the world¡¦s fiercest national rivalries as you live the dream of competing against fans from around the world for the 2010 FIFA World Cup™. Take on the challenge of leading your home nation from qualification right through to a virtual re-creation of the FIFA World Cup Final™ and feel what it is like to score the goal that lifts a nation.For the first time ever, play out the 2010 FIFA World CupTM in a full and authentic online tournament mode. Carry the hopes and dreams of your favourite nation into battle against fans from rival countries. Compete under the same conditions your real-world heroes will face in South Africa, from the group stage through the knockout rounds to the chance to be crowned 2010 FIFA World Cup South Africa TM champion. For fans of nations that failed to qualify for South Africa this is the chance to replay and re-write history. Plus, earn individual and team points to prove your nation is the best in Battle of the Nations.Spectacularly presented in true-to-life detail, EA SPORTS 2010 FIFA World Cup South Africa™ features all 199 national teams that took part in qualification, all 10 officially licensed stadiums to be used in South Africa and stadiums from each qualifying region. Everything fans love about the World Cup comes to life in stunning detail, including confetti cannons, streamers, & fireworks¡Xjust like the official tournament. Plus, supporters who follow their heroes to South Africa will be in the stands waving their country¡¦s flag, holding giant banners and cheering in their native language.EA SPORTS 2010 FIFA World Cup features a more sophisticated, faster-paced and responsive version of the market-leading EA SPORTS football engine that drives the award-winning FIFA 11¡Xthe highest rated sports game on this console generation. Gameplay innovations capture the journey from qualification to the final tournament with home and away strategies for every nation, situational tactics in-game, and altitude affects that fatigue players faster and even impact the flight of the ball.

obarreda (24) on 07, May. 2012 23:02 (HKT)
First class world cup
Well the 2010 World cup is over but this game is still a must. Covers all teams under FIFA organisation. So if your country didn't qualify you can make it for real.
[This review is based on another version of this product]
naneiko1 (10) on 28, Sep. 2011 10:29 (HKT)
Fifa World Cup - Long overdued Review
EA's latest WC offering allows you to play as your favourite team right from qualiflying!
I did that an took my country Singapore all the way to the WC, an exciting and engaging experience!
All soccer loving fans should get it!
[This review is based on another version of this product]
Odie (466) on 27, May. 2011 08:44 (HKT)
FIFA World Cup At Home !!!
2010 FIFA World Cup South Africa has got potential to be one of the great soccer games with its colourful & vibrant visuals & the gameplay is realistic as ever. Thats until FIFA 2011 came around. But hey, it's World Cup soccer & only comes by once in every four years. How many more four years have we left? So its highly recommended for avid soccer fans to have one.
[This review is based on another version of this product]
mattphair (7) on 30, Dec. 2010 19:16 (HKT)
Buy FIFA 11 instead
This was a great game to buy during the summer when the world cup was going on. In fact, having never played a FIFA franchise game in the past, playing World Cup South Africa convinced me to go ahead and buy Fifa 11. Comparing the two, FIFA 11 is way more bang for your buck in terms of teams and leagues, but if you're dead set on rooting for your home country, there's a lot of pomp and circumstance and it really captures the feeling of World Cup soccer.
[This review is based on another version of this product]
thiago_sobral (23) on 30, Nov. 2010 08:52 (HKT)
Nice Game
beautiful game, good purchase, I liked very
1 »