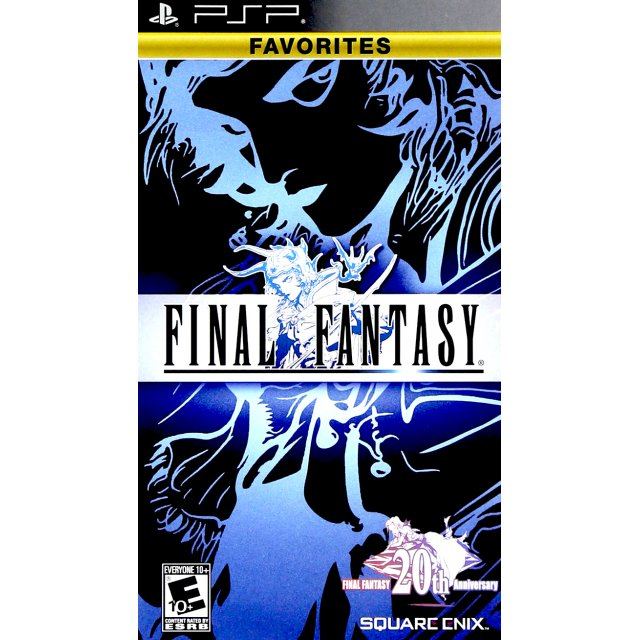 Works on all systems sold worldwide, a correct regional account may be required for online features.
1w Expected stock arrival within 1 week.
US$29.99
Manufacturer
Square Enix
Rated By Our Customers
Compatible With Sony PSP™ (PSP™)
Version

If you are familiar with Final Fantasy Anniversary Edition (Favorites), why not let others know?

adelmo (5) on 25, Jul. 2017 11:45 (HKT)
FF1
Great games, absolute classic!
frankilisasi (1) on 03, Mar. 2016 15:24 (HKT)
Awesome!
This is the definitive edition of the game!
docomogame (540) on 02, Apr. 2015 23:50 (HKT)
Best classics
Great remake RPG
matti (3) on 03, Mar. 2014 20:28 (HKT)
The origin of FINAL FANTASY
All aspects of the original game were refined in this version for the PSP. It looks very good, especially the magic spells. Another improvement over the original game is the combat system. After defeating an enemy your party members automatically attack another foe. The item attributes are now explained in the inventory, that's very helpful and was also nonexistent on the NES. That may not sound very exciting, but it helps and makes the game so much more playable.
The game has too many random encounters. Seriously, there are some places where you have to fight after every single step (and I am not referring to the 'Hall of Giants') - and this in mazelike dungeons with multiple floors. Often these fights are not even challenging but annoying, because you try to make some progress. The music is good but repetitive. I finished the game after 20 hours, i believe it's the shortest in the series.
The original game was released in 1987 (JPN) on the NES and it was Squaresoft's first FF game, so it's understandable that it was not without its flaws. All in all it's a well-made remake and by no means a bad game, but in comparison to other FF games (like IV, V, VI, ...) I can't give it a higher score.
[This review is based on another version of this product]
tha_killerahz (2) on 19, Apr. 2007 23:04 (HKT)
I\'ve purchased this game and...
...loved it!
This game (regard-less of the number of re-makes)
is awesome!^_^
a great idea for a 20th Anniversary!
a MUST-GET if you\'ve never played this...or if your looking for an old-school 2D rpg for the PSP
a big PLUS because of the shortage of non-tradition RPGs for the PSP
and don\'t worry if you don\'t understand Japanese...because it contains an ENGLISH option!