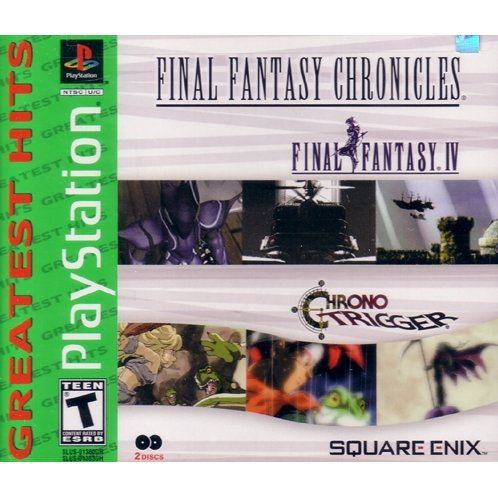 Square Enix
Rated
By Our Customers
Compatible with PlayStation™ (PS™)
For US/Canada systems.

From the glory days of RPGs, by the masters of the game, Final Fantasy Chronicles unites two classic Square role-playing games in one must-own package. From the Final Fantasy realm comes a brand new translation of the great Final Fantasy IV (released in America as FF2), while from other lands comes the equally memorable Chrono Trigger. Each is enhanced from their acclaimed originals, with new cinematic sequences, new gameplay, enemies, and items, and a translation truer to the original Japanese text. Chrono Trigger even includes new elements that help tie up loose ends that lead up to its sequel Chrono Cross, while Final Fantasy IV takes the gameplay to another level with a two-player battle mode that for the first time in a Final Fantasy game lets other players join together in combat sequences. Nearly every RPG you've played on PlayStation traces its inspiration back to the two landmark RPGs in this collection. Celebrate the games that ignited a passion and started a role-playing revolution with Final Fantasy Chronicles.

If you are familiar with Final Fantasy Chronicles (Greatest Hits), why not let others know?