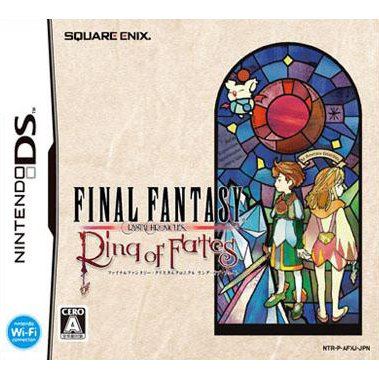 Final Fantasy Crystal Chronicles: Ring of Fates is the sequel to Final Fantasy Crystal Chronicles for Gamecube™. The game takes advantage of both the local wireless and Wi-Fi capabilities of the system.The new installment of Crystal Chronicles uses a similar control scheme to the Gamecube™ version, with A to use Commands; Y to pick up items (and allegedly enemies); and the B button to jump (which adds a layer to strategy, with multitiered levels in the 3D environment).Most of the gameplay takes place on the top screen. The touch screen shows maps, as well as stylus access for different weapon attacks. Special attacks are performed by pressing the right trigger button, the screens will swap allowing enemies to be attacked just by touching them with the stylus. If done correctly, chained attacks can be performed.In multiplayer mode, the player's class greatly influences lifespan. Five character classes can be picked including Warrior, Archer, White Mage, Black Mage, and a support class. Each has specific roles to be fulfilled in the multiplayer mode.

If you are familiar with Final Fantasy: Crystal Chronicles - Ring of Fates, why not let others know?