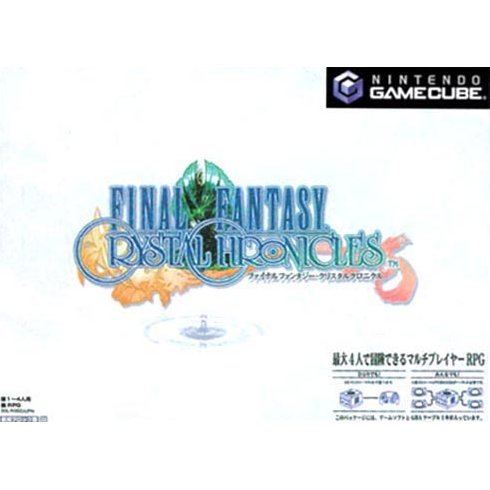 Square Enix
Rated
By Our Customers
Compatible with GameCube™ (GC)
For JPN/Asian systems, use Freeloader for other.

NTSC
1w Expected stock arrival within 1 week
Price
US$51.99
Our previous price:
US$ 87.99
You save:
US$ 36.00( 41% )
Play-Asia.com Return & Refund Policy
Trustpilot
Trustpilot
Click on a thumbnail to see more pictures for Final Fantasy Crystal Chronicles

Building on the hugely successful role-playing series, Final Fantasy Crystal Chronicles, an exclusive title for Nintendo GameCube, not only features stunning graphical worlds, but also extends game play to the companion Game Boy Advance. An innovative interface allows up to four players to use a Game Boy Advance system as a controller, receiving private information on their screens. This never-seen-before level of enhanced game play extends connectivity by encouraging players to communicate directly with party members, solve puzzles, cast magic and negotiate deals.

If you are familiar with Final Fantasy Crystal Chronicles, why not let others know?

[This review is based on another version of this product]
OscarKa (14) on 02, Oct. 2010 10:34 (HKT)
Square Enix delivers
Live up to standards. Enjoyable.
[This review is based on another version of this product]
vpetmaster19 (11) on 22, Mar. 2008 19:46 (HKT)
I would have to say.....
This is one of the best games i have ever played and i have have played almost every one of them for the gamecube. But when you get to a certain spot in the game i got stuck and there was nothing for me to do i used up a week trying to find out what to do then i gave up. But im going to try again and see where i get this time. Also this game is really cool but it is almost nothing lke any final fantasie one the ps2 that i have played but it is different in a good sort of way.
Solty (105) on 11, May. 2007 22:04 (HKT)
Ive owned this game before
Its fully Japanese, if your wondering, No english language option sorry
it is however somewhat playable without knowing Japanese, just its more give or take when it comes to items and spells, you may think your casting fire but your actually healing yourself :P
K.S (7) on 09, May. 2004 01:23 (HKT)
Nice graphic
It is possible the game with best graphics on GC, although Square is always good at its FFs, the game play is quite limited: multiplayer need more than two GBA and the spells and techs cast speed is quite long and simple. There are combinations of spells but too many are repeated. In a word it is good to have it but I wouldn\'t recommend it with my full strength.
Anonymous on 19, Jan. 2004 07:57 (HKT)
No title
best rpg u can get in the gamecube SQUARE ENIX RULES
1 »