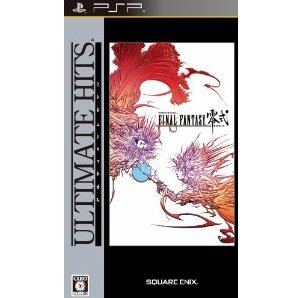 People cannot choose when they are born and where they are born in, but they can choose how to live their lives.Veriumcity Suzaku is under siege from their neighboring country Bakufu, although the summon beasts fend off the battle ships by the shore, the Bakufu found a way to deactivate their crystal, thus turning off the country's defensive system.Choose your player character from class zero, each has a different skill set, and infiltrate the city center to reactivate the crystal. Take your team with you to clear missions, and when things get too tough, turn on your networking function to ask a friend to help you out.

If you are familiar with Final Fantasy Type-0 (Ultimate hits), why not let others know?

matt986 (132) on 04, Mar. 2015 20:03 (HKT)
Great little game
I bought this game in the lunar new year thing, after having played the demo on the PSP, and I'm well impressed. Basically the game arrived new sealed and contains 2 UMDs inside. Knowledge of Japanese is required, I don't see how people can enjoy it without, and from what I've read of the story and seen of the graphics, this is like a Triple A game in handheld form. It also arrived in a little under 2 weeks, which is very fast.
dawezy (2) on 29, Jul. 2014 22:16 (HKT)
Would be alot better.
If SE would let a English patch be made available~

From what I have played on it so far though, very solid, works like FFXII only on a clearer screen and runs faster - music and sounds in general are way up there :D
trunions (151) on 27, Jun. 2013 14:21 (HKT)
Great Final Fantasy game.
While this the most violent Final Fantasy games that I have ever played. It is also one of the best.
rongman (13) on 19, Jun. 2013 20:36 (HKT)
The best PSP game out there.
Final Fantasy Type-0 is probably the best game I have played on PSP. It builds upon the battle system created for Final Fantasy VII: Crisis Core but lets you have three characters in battles. The story is more dark than usual Final Fantasy games, depicting a large scale war. It's the first time I see so much grit in a Final Fantasy game, but the way the war is depicted feels more real this way, despite all the fantasy in the game. The graphics are also some of the best on the platform, only rivaled by one other game. And the soundtrack is one of my favorites in the last few years. This is a must have game for Final Fantasy fans, but could easily be enjoyed by all role playing game fans.
itoshiibears (7) on 14, Jun. 2013 15:59 (HKT)
Great
It's really an awesome great game and the music's fantastic =)
1 »