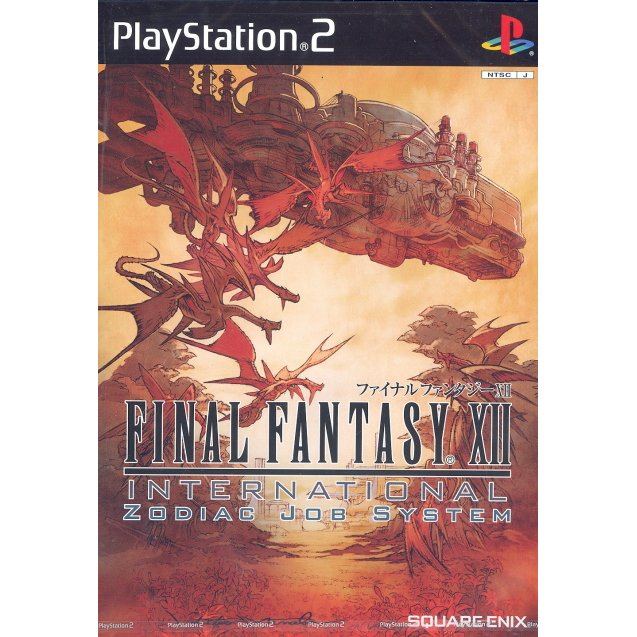 Since 1987, the FINAL FANTASY® series has sold over 63 million units, making it one of the best-selling video game franchises of all time. FINAL FANTASY XII carries on the tradition of gaming innovation, fantastic graphics and epic storytelling. With a brand-new battle system bringing more realistic and seamless action to the player's fingertips, this latest installment promises to take role-playing games to the next level through a beautiful and heart-stopping adventure.The story of FINAL FANTASY XII takes place in a world called "Ivalice", in an age when magic was commonplace and airships plied the skies, crowding out the heavens. War was on the horizon. Seeking to strengthen its base of power, the great Archadian Empire had been invading and subjugating its neighboring kingdoms one by one. The small Kingdom of Dalmasca was one such kingdom. Our story follows Vaan, a young man living on the streets of Dalmasca's Royal City of Rabanastre, the Princess Ashe, the sole remaining heir to the Dalmascan throne who had been given up for missing, as well as Vaan's friend Penelo, the sky pirate Balthier, Balthier's partner Fran and many more on an adventure through Ivalice that traces the mysteries behind the Archadian Empire's invasion.Final Fantasy XII International Zodiac Job System supports English voice casting, a 16:9 mode, an updated battle system and lots of other alterations not found in the original release.

If you are familiar with Final Fantasy XII International Zodiac Job System, why not let others know?

[This review is based on another version of this product]
apa ajah (108) on 16, May. 2012 02:12 (HKT)
great just great
first time i played this game is in the third after the game release. i never forgat that time in 2006. i cant understand japanese language so much, but i always play the game i like to play even is in alien language, my habbit. so i finish the game in japanese and when the US version released, i didnt play it.

its great game for final fantasy, its the 4th final fantasy game i favourited. after FFIX, FFXIII and FFTA2. what i really like the most in this game is the plot.. storyline of course and the scenery, its very beautiful. and the battle system... its very very very not boring, i mean i really love it very much. you dont need wait any loading to battle scene and the ATB is quite fair and very enjoyable. and all the boss and the weaponery/defen/acc is very fun to know it.

and for the first time i try this international zodiac version. this along weekend (start thursday) im gonna to the hell with this game, ahh forget about the ps3 games >_
[This review is based on another version of this product]
young7yang (40) on 01, Mar. 2010 17:32 (HKT)
a must have for any Final Fantasy fan
not my favorite in the series but difinetly worth every peny.. this game was amazing in terms of gameplay and scale. the only draw back was the story which could have been better
[This review is based on another version of this product]
g4skaiser (11) on 02, Sep. 2009 16:33 (HKT)
a collector's item if youre into game collections
same FFXII game, lots of new and improve gameplays like the job system. everything is in japanese though,so better check the net for translations. be aware that the dvd included is also region locked.
[This review is based on another version of this product]
batriz (3) on 16, Jan. 2008 10:40 (HKT)
Great, but could have been better.
Although with the new stuff that's been tweaked, i felt this version was a lot weaker that FFX-2: international+last mission. But i have enjoyed playing this through. I played the english with 70+hours without the side-quests, but this allowed me to finish in just 28 hours! That's because of the speeding up mode which lets you play twice the speed of the original.

Nevertheless, the bonus DVD makes up for a reasonably good version.

**To add the bonus DVD, the japanese interviews DO NOT have english subs.
unclgene (3) on 12, Jan. 2008 00:55 (HKT)
No English menues
This version should not be sold at all with the word "English" any where on it. This is not like SE's usual international versions with the ability to change menu's for the "international" market to play the game. This is strictly a Japanese version with the ability to turn on English words "if" you can read the menu.

Waited for this version long time to play the full game like the other final releases I own and wasted the money on it cause of false advertising by the Square.
1 »