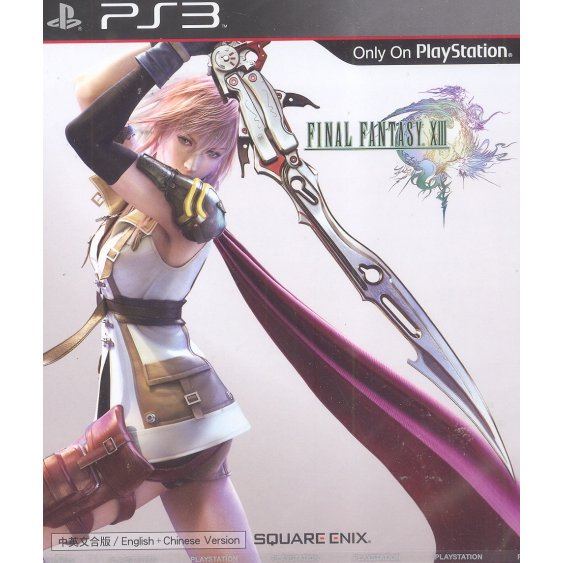 A tale of souls from a futuristic civilization illuminated by the Light of the CrystalThis eagerly anticipated title takes full advantage of the PlayStation 3 system's advanced hardware, providing tangible, intuitive controls while delivering seamless transitions between real-time gameplay and stunning in-game cinematics. The latest in cutting-edge technology has been utilized in development of FINAL FANTASY XIII, thus making this newest addition to the FINAL FANTASY series worthy of the title "next generation."

If you are familiar with Final Fantasy XIII (English + Chinese Version), why not let others know?

azrulshahimy (51) on 12, Sep. 2012 21:48 (HKT)
Could have been much,much more.
Ok,for one thing,i hate the linear gameplay and the button mashing. The game doesn't encourage exploration,but in a sense it never overwhelms you. Good for pickups,not so for marathons.
KniteRaid (4) on 11, Apr. 2012 13:05 (HKT)
Best of Both Worlds
I admit- I started to cry when I saw the characters speak in Japanese with english subtitles

I literally waited 2 years to play this game, but when I heard this version came out - I impulsively bought this game without any second thoughts despite having a copy of the game already.

The only con about this game is that the captions are light subbed - not accurate to the actual conversation, almost like they overlaid the English copy of the game over the Japanese version

~ Square Enix should continue producing this ver. for audiences that enjoy the Japanese voice actors over the dub
Yoshimaru (1) on 01, Apr. 2012 08:54 (HKT)
Great Animation But Lacks in Gameplay
The graphics and animation are in full HD 1080p which is breathtaking, however the gameplay is sorely lacking.

The battle system is tied to time and thus it plays more like an action game rather than the turn based system traditional Final Fantasy titles are famous for. If an RPG gamer buys a RPG game why would he/she want an action game? The game requires that the player slog through the time based system otherwise the story can't continue which is a big drawback in the gameplay mechanics.
sapienoid (26) on 07, Jun. 2011 12:57 (HKT)
Surprising
Despite all the uproar about how linear the game was, I was surprised when I started the game. It's not like it was the only game that was so linear compared to other games. Other games use it as well but we just never felt it was so because of obvious borders. However I felt that the linearity worked for the game by driving the story in the beginning (although it was very linear in the first 10 chapters of the game). When I got to wider open areas, I felt pretty lost. lol.

Loving the new battle system as well. Though not entirely. It kinda feels like a combination of the traditional turn-based system and some new additions. Love the crystarium system too. Feels like FFX.

Everything else is up to my expectations so far. The graphics and the quality of the game. But the best part I love about this version is the Japanese voice-overs! So great to be able to play it in original audio with all the text on-screen in English. But there're few audio parts that are missing (the characters talk but no voice is there).

Overall, I was pleasantly surprised and very happy that the game is in my collection.
sapienoid (26) on 07, May. 2011 16:59 (HKT)
Love it.
Had always been a fan of the FF series. There are some changes that I like and some I don't. Okay, it may be too linear for some people's taste. For a seasoned gamer, you probably would think like you're being treated like a non-gamer with the ultra-linear style and how the tutorials are done. The game is beautiful in HD, no doubt. Transition between pre-rendered scenes and in-game engine rendered ones are smooth and sometimes you just don't really realise that happened. That proves how good the graphics are. Maybe it's too linear for most, maybe it's the worst FF instalment for most. You can't please everyone that's for sure...but personally I love it!

One thing I like about this specific version, is that I can play it with Japanese audio and English subtitles. =D
1 »